I've never had turkey outside of a Thanksgiving meal (I know, I'm so sheltered), so this menu was an eye-opener. I'd prolonged making it as long as possible before the turkey legs were going to spoil since I'm not a big fan of raisins, and especially not a fan of prunes. Yeah, yeah, they're called dried plums now, but only because they had such a bad reputation as prunes that they had to do something drastic. They're still the things old ladies eat.

The turkey legs were easy enough to find at Central Market, but they come prepackaged in sets of three. So I had to make 1.5 times the recipe. But that also meant 1.5 times the yummy goodness. Plus, I don't think 2 legs is enough for 2 people, especially if one of those people is a large male. The risotto rice came from the bulk bins at Central Market, and the saffron was in a little plastic box on the spice aisle. I got shiitake mushrooms for the top of the risotto since the locust hordes apparently bought all the cremini mushrooms before I got to the grocery store, and the produce crew was still recovering from the onslaught. Never seen vino rancio anywhere, so I took the suggestion of substituting sherry. Plus, I don't use anything that probably shares the same Latin root with the word rancid. 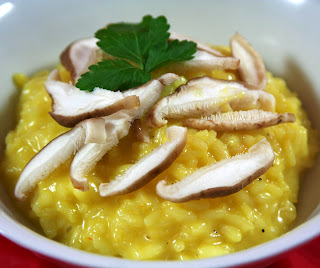 The risotto made me suspicious at first since the instructions said to basically dump all of the broth in at once, but I did as I was told. And it turned out magnificently. I can honestly say that this is the first time I've eaten a risotto where I could taste all of the individual ingredients. I could taste the Parmesan cheese, the lemon juice, the saffron... Of course, this may just be a byproduct of my culinary genius in balancing flavors, but I have to give Chef Adria some credit. 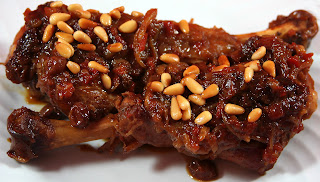 The turkey was probably one of the best things I've made out of this cookbook so far. I let the raisins and prunes have a boozy soak in some sherry while I was at work, and then they made their way into a fabulous braise, all fat and happy. The flavors in this dish just click. It's savory and sweet at the same time. And even though I hate raisins and distrust prunes, they cook up into this silky sauce that is just fabulous. I seriously considered licking my plate and stealing the whole extra turkey leg. 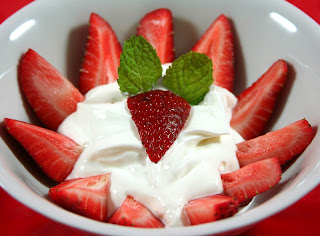 For the strawberry dessert, I didn't have a fancy-pants whipped cream siphon with nitrogen canisters, so I had to make do with my trusty Kitchen Aid mixer. And with begging my parents to buy me a fancy-pants whipped cream siphon with nitrogen canisters. I'm such a food nerd. But back to the strawberries. The only strawberries I could find in the middle of winter were imported from Mexico, and not organic. These means that I probably just ingested a pound of synthetic pesticides and who knows what else. Strawberries are on the red list you know! That means only buy organic. Unless you're desperate, and it's January. I whipped up the cream and tossed in the yogurt with some powdered sugar, and it made a pretty refreshing dessert after the richness of the turkey legs. I still want a siphon, though.
Posted by Sara at 11:34 PM