Did you know that lamb neck is the new pork belly? Yeah, me neither. And apparently none of the butchers in the city of Dallas have heard this revelation either. I think I searched for at least two weeks for lamb necks. Everywhere I went, I got that look people give you that makes you feel like you're crazy. The “you're-looking-for-WHAT?” look. What's sad is I'm almost used to it at this point. Dallas, we need better grocery stores! And a decent butcher that has WHOLE CARCASSES would be awesome. When did we get so disconnected from our food? I better not start cooking from Fergus Henderson's nose to tail eating book at any point because I'd probably be limited to something like two recipes. Sigh.

I finally managed to locate lamb necks at an ethnic grocery store. A halal butcher, to be specific. When I asked for the lamb necks, the nice butcher picked up this huge cleaver and went back in his freezer. Next thing I know, I can hear him hacking away at something. The things I go through for dinner. Also, two lamb necks came to a whopping $24, which does not fall into the category of "budget eating" to me. Everything else was pretty standard and came from Central Market, but I will say that the cocoa for the truffles was from my hoard of Valrhona cocoa. Which is only used for ultra super special occasions. Since it's $13 a box. 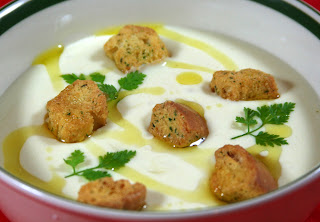 I kinda goofed with the vichyssoise. First, Chef Adria isn't really specific about potatoes for the soup, so I got the only organic potatoes Central Market had - Yukon gold. It turned out kinda gummy, which I was afraid of, so the next time I try this I am definitely using russet. If I can find them. The soup did taste good though, so I was pretty happy. Until I went to boil the 3 minute egg that goes in the middle. Big mistake. Three minutes is not long enough to have a egg that holds together enough to remove the shell. It's just not. Especially when you put the egg in already boiling water and set your timer. The things just came apart in my hands. I was honestly quite shocked since Chef Adria hasn't let me down yet. Very unfortunate. So no egg in the soup. 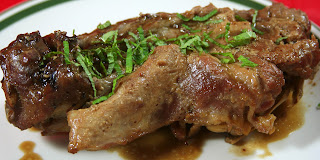 The lamb necks were a lot better than I was expecting. The necks had the usual mustard and mint which always seems to be paired with lamb, so the flavors worked. The meat was tender and mild and flavorful, and I really liked it. I think cooking it with the neck bones intact probably helped in that department. However, I'm not sure I liked it enough for it to be worth the 2 week search for ingredients. If they had it at Central Market, I would probably make it again. Otherwise, probably not. 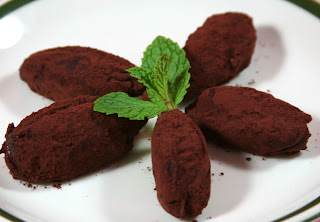 Oh, truffles. You sinful, shameless little flirts! How you toy with me! Your rich, chocolatey centers with your bitter dusting of cocoa! And brandy! Playing along with such wanton seduction! But really, what could be more perfect?