Ah, bacon. Bacon makes everything taste better. I think you could even put it on dirt, and it would make the dirt taste awesome. So what could be better than a big piece of bacon, smothered in teriyaki sauce? Answer: nothing. I'm going to have to disagree with the whole lamb neck in, pork belly out. Pork belly is most definitely in. My stomach, that is.

Pork belly, despite its multiple years of chef-inspired fame, is still pretty much nowhere to be seen. I got my slab from the Chinese grocery, where it was much cheaper than the independent butcher who had some. Unfortunately, I had to buy a whole slab, but that's okay. That just means I have more pork belly goodness hiding in my freezer for later. The sweet potato, as you might notice when you scroll down, is not a regular sweet potato. I got a Japanese sweet potato in the vegetable co-op crate, so I just went with it. Everything else was easy to find. 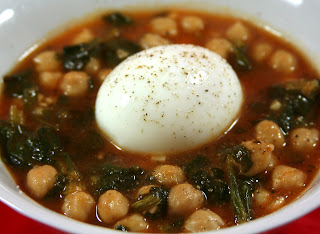 I wasn't really looking forward to this chickpea/spinach dish since it had one of those dreaded 3 minute eggs plopped in the middle. And I remembered what a fiasco the last eggs had been. So I did my research, and found out that if you put the eggs in the cold water in the pot, bring it to a boil, then set the timer for 3 minutes, you'll get an egg that actually comes out of its shell, but still has some liquidity in the yolk. Hey, it's better than nothing. And organic cage-free eggs aren't exactly cheap. This means limited experimentation. The chickpea/spinach mixture was pretty tasty, probably due to the smokiness of the cumin. I did have some trouble with the whole tomato-draining-through-a-sieve step. The tomato mass pretty much sat there and did nothing until I came along and stirred it with a spatula. The end result was tasty and probably pretty healthy. The yolk of the egg swirled into the veggie mixture and added a creaminess it didn't otherwise have. Pretty good, pretty good. 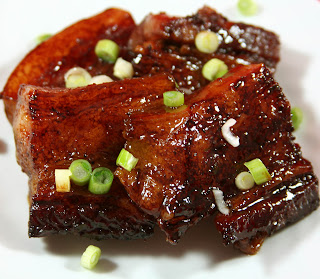 But nothing beats pork belly. Pork belly smothered in a sweet teriyaki glaze. Pork belly that melts in your mouth. Even though you know you should probably cut the fatty bits off because it's going to give you coronary artery disease, you don't. You suck it all up and let it melt on your tongue. So good, and yet so bad. Chef Adria, for this you are evil. 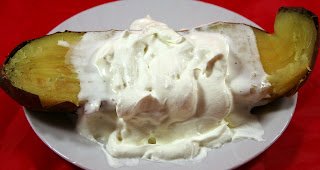 Hi! I recently found this blog entry on Google while looking for soups with chick peas. Do you have the recipe for the Garbanzo Beans with Spinach and Egg? Thank you! fayn.halenaryn @ gmail.com