After the search for those willy sardines, I wanted something with easy to find ingredients. Like eggs. And pork chops. That's about as easy as it gets in American supermarkets. But what you actually do with those ingredients is what makes them interesting.

Nothing especially hard to find here in the ingredients. The pork chops are those thin, boneless chops I've sometimes seen advertised as breakfast chops. Not that I've ever eaten them for breakfast, but apparently somebody has. Amazingly, they didn't have them at Central Market, and I'm not enough of a sadist to ask the butcher to make me some when they close in ten minutes. I got mine prepackaged from Tom Thumb. The unsweetened grated coconut came from the bulk bins at Whole Foods. This isn't something I've ever seen at a regular grocery store. Other than that, everything is pretty standard. 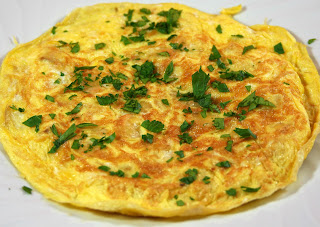 The omelet was definitely...interesting. I ended up making two small omelets since I didn't have a frying pan with sloped sides that was big enough to handle one massive omelet. I kinda goofed on the first omelet, assuming I know better than an award winning chef, and I tried flipping the thing with a spatula. Bad move. Omelet everywhere. Lesson? Follow the directions. It still tasted good though. Second omelet, I slid onto a plate, then flipped over into the pan. It was awfully pretty on the plate. The taste? Weird, but somehow good. I'd never had an omelet with potato chips in it. And even though the instructions say that the potato chips will stay crispy, they don't really. Unless my overpriced organic Central Market chips are somehow substandard compared to El Bulli potato chips. It's a mystery. And the omelet still needed salt. So there. 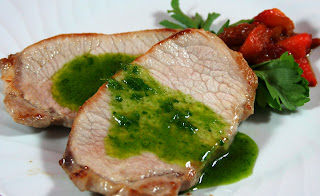 I liked the pork chops a lot more than the omelet, even though the flavor was very light and subtle. The roasted pepper, which spent the entire time it was in the oven spewing pepper spray all over everything, was actually pretty darn good. I'm excited for the recipe in Meal 29 where you do the same thing with eggplant, too. The parsley oil that you pour over the chops definitely completes the flavor, but it also got olive oil up into the small cracks in my mini chopper, and it's still leaking out. Yes, okay, I don't have an immersion blender. I'm working on it. The whole trick with the pork chops is that each bite needs to have all three components. Pork chop, parsley oil, roasted pepper. Only then do you reach pork chop nirvana. 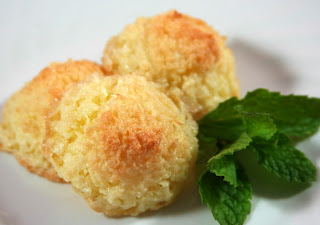 The macaroons were awesome. Yep, that good. Easy to make, easy to bake, easy to take. And put in my mouth. They ended up light and gooey in the middle, with a little crunch on the top where they browned. They didn't want to come off my Silpat mat until they were completely cooled, however, which made pre-dinner swiping difficult.
Posted by Sara at 10:31 PM