Okay, I'm going to say it. I was scared that Chef Adria was reaching down into the American South for some inspiration. The South is quite a long ways from Spain. And I have a feeling that most of Chef Adria's interaction with our country has involved the coastlines, specifically New York and LA. So I was scared. So scared I used bottled barbecue sauce instead of braving the book's recipe. I might come back and try the barbecue sauce later, but I like that Chef Adria is fine with us using whatever makes us happy. So understanding.

This may be the least shopping-intensive meal I've made in a while. Maybe. Cauliflower was even on sale. A little half rack of baby backs was waiting in the butcher's case like it had my name on it. Banana? Banana? Yeah, that's not ubiquitous or anything. Shopping done. 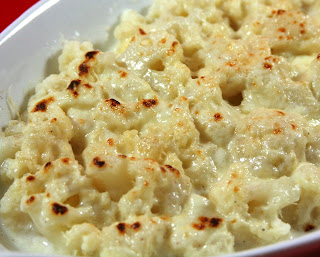 I love cauliflower smothered in cream sauce and melted cheese. Heck, I love pretty much anything smothered in cream sauce and cheese. It's like bacon. Everything just tastes better. Even though the recipe for two said to leave out the onion and clove when preparing the sauce, I still got out a quarter of a small onion and a little clove and tossed them right in. The thing I really struggle with in these applications is how much salt to add. You salt the sauce, but then the cauliflower is totally unsalted, so it needs even more salt to compensate. But then how much salt is too much?? It shouldn't be this stressful! Basically I just kept tasting everything, tiny little bites, until it seemed right. And I got pretty darn close. I will definitely be repeating this one. 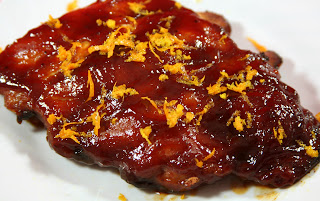 Nothing really to see here. Ribs. Smothered in barbecue sauce. It's not how my mom makes them. And frankly, I think she does a better job. I had to cook these longer than indicated to really get that falling-off-the-bone tenderness. And the amount of barbecue sauce called for is pretty laughable. I lacquered those puppies. Good, but mommy knows best in this case. Except I'm totally swiping the orange-zest-on-the-top idea. It just works. 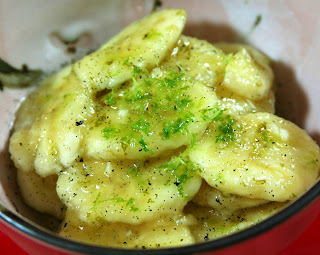 I'm about to admit another food prejudice. I hate ripe bananas. Yes, I'm that weird person who eats green bananas. But for this dessert, I let my bananas sit out on the counter until they were super yellow and had brown spots blooming all over them. Somehow I managed to refrain from trashing them. I did NOT think I would like this dish. Chef Adria keeps surprising me though. Something about the lime juice mixed with the Jamaican rum mixed with the vanilla bean I sacrificed...it just works. It cuts into the sickly sweetness of an extra ripe banana and just makes it good. And you have to use the vanilla bean! It is not optional, as it may appear in the book. Trust me on this!

Great photos. Made this tonight and was wondering how it went for others. I will take a look at your other Family Meal posts.