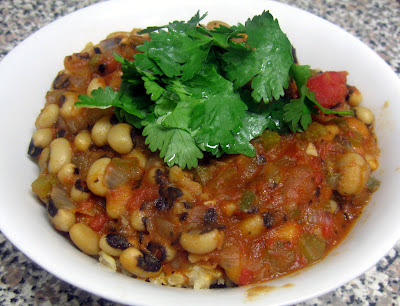 I'm not sure where the tradition came from to eat blackeyed peas for New Year's, but it's pretty ubiquitous here in the South.  I'm not a big fan of plain old blackeyed peas, so I tried to find something a little more interesting to make with them.  I came across a website of vegan dishes called Fat Free Vegan Kitchen that had a very interesting blackeyed pea recipe.  These peas are done creole style, which for me means Flavor.  Yes, capital F, Flavor.

The holy trinity of onions, celery, and bell pepper make a showing, with some tomatoes and garlic.  I used a can of fire-roasted tomatoes, so I got an extra punch there, and a jalapeño pepper helped make it a little bit spicier.  The blackeyed peas were fresh, not frozen or canned, so they didn't end up mushy.  You also use some liquid smoke to give the dish that barbecue flavor, and it certainly does something magical here.  I served the peas over some brown rice, and it was a perfect start to a new year.

Heat the olive oil in a dutch oven until it shimmers.  Add the onion, bell pepper, celery, and jalapeño pepper, and sauté until the vegetables are tender and the onion is translucent.  Add the blackeyed peas, tomatoes, vegetable broth, and all seasonings except for the liquid smoke.  Simmer the mixture for about 45 minutes, or until the blackeyed peas have softened.  Add the liquid smoke, and stir to combine.  Top with chopped cilantro, and serve on brown rice or cornbread.