I remember the first time I cooked a whole fish for my family. I took my mom with me to the Chinese grocery store, and I had them pull a live tilapia out of the tank. The guy behind the counter then proceeded to beat it over the head several times before he started ripping its guts out. I thought my mom was going to lose it. Hey, at least it was fresh, right? My mom insisted that the head not make an appearance at the dinner table, or she wasn't going to be able to eat. I'm not quite that squeamish, so when I saw this menu, it didn't really faze me. The only thing I hate about whole fish is pulling all those teeny tiny little bones out of your mouth while you're chewing. So not ladylike.

I kinda skimped with the pesto. When I looked at how much basil, pine nuts, and cheese was required, and then I looked at how much of the final product I actually needed for this ONE recipe that actually uses pesto, I just couldn't do it. Maybe I'll come back and try again when I'm feeling flush, but for this trip, I just used a nice small jar of Alessi pesto sauce. Hey, it had the same ingredients! I checked the label. And yes, I know I cheated. As for the fish, it appears that Chef Adria likes to pick fish that only appear in the Mediterranean, off the coast of, well, Spain. Needless to say, there is no gilthead bream (read: brim) in the stores in Dallas. After a long conference with the fish guy at Central Market, I decided on a stripped sea bass that was big enough for two people. When I got home, I realized this was one of the suggested substitutions listed in the book, so I felt vindicated. The mandarin oranges came straight out of my bi-weekly produce share from the co-op. It was almost like I was meant to make this menu. I didn't have any Cointreau, although I will probably acquire some soon, so I used Grand Marnier. The ice cream was this fabulous vanilla bean ice cream that Haagen-Dazs makes with only five ingredients. No gums or artificial flavors for me and my organic oranges. 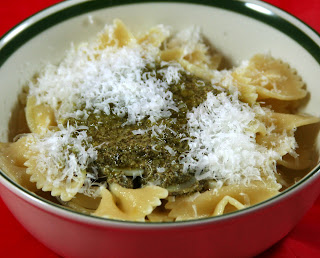 The farfalle pasta with the pesto sauce was pretty darn good, especially considering it took maybe 8 minutes to make. And yes, I know that's because I cheated with the sauce. But I followed the rest of the directions, even the bit about mixing some pasta water into the sauce to thin it out a little bit. I also smothered it with cheese, so you know it couldn't be bad at that point. In a slightly larger portion, and with a nice piece of garlic bread, this could be an awesome dinner on its own. 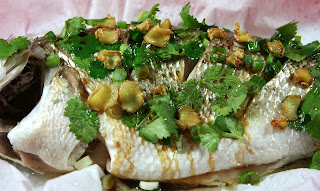 Ah, the fish. The fish that was supposedly de-scaled. But really wasn't completely de-scaled. I think I did a better job of de-scaling my sardines. But that's okay. I skimped on the pesto, so the dinner got me back with the fish. The darn fish was too big to fit in my little steamer, so I ended up having to rig my stovetop smoker with a foil tent to get the thing to cook right. The ginger oil was incredible, but it made the fish just over-the-top rich. I always thought of fish as a light meal, but this one proved me wrong. I could only eat about half of my portion before it was getting to be too much. Oh, and I had to keep pulling scales out of my mouth, which gets really irritating after, say, one. 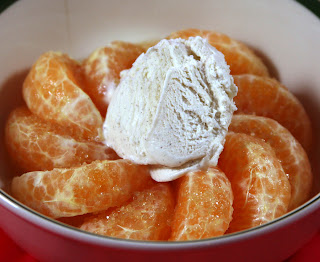 After all of the richness of the previous two dishes, the oranges were very much welcome. Hey, maybe Chef Adria knows what he's doing after all. As if I need convincing. The liquor took it from afternoon snack to fancy dessert, the sugar added some crunch, and the ice cream made it all creamy and soothing. Definitely a good use of the oranges. And I needed all that citric acid to cut through that darn fish. Blech.