When I first looked at this meal, my thought was....what? German potato salad, Thai curry beef, and Italian vinegar and strawberries. Very weird. How does one come up with this kind of combination? I'm wasn’t seeing the flavor complements. And I was frankly a little scared. I mean, there's a friggin' frankfurter in the potato salad. And yes, I used frankly on purpose. See what I did there? Groan.

Apparently Thai Kitchen does not make yellow curry paste. Just red and green. How do I know? I searched every grocery store in town. I finally realized I should probably try the Chinese market, and of course there was a tub of yellow curry paste sitting on the shelf. This cookbook is starting to feel like a scavenger hunt. Since I didn't want to use a regular ol' ballpark frank for my potato salad, I went to Kuby's and got a wiener out of their deli case. The little gherkins came out of the bulk deli pans (near the 30 different types of olives) at Central Market. Everything else was pretty normal. 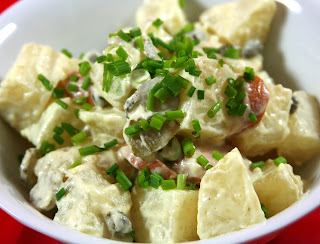 I couldn't figure out why there was a frankfurter in the potato salad. I've never had potato salad with a pressed meat stick in it. Have you? But then I remembered a German girl I knew in Austin when I was going to college. She put hotdogs in pretty much every salad she made. So maybe this is a German thing. Just like putting a soft boiled egg in every bowl of soup is probably a Spanish thing. The Yukon gold potatoes held up really well after cooking, and I loved the little gherkins and capers. They really gave a nice tang to the salad. And the frankfurter was actually kind of good. A little smoky and chewy. This salad was one of those things where you're sure you're going to hate it before you take a bite, but then you chew, and you kinda like it, so you're completely conflicted on the final opinion. I'm going to go out on a limb and say I liked it. 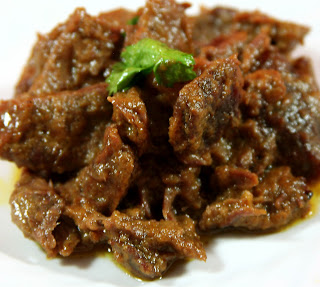 The failure of the Thai curry beef is probably completely on me. First of all, I don't have a pressure cooker, so I had to make it in the oven. Second, I didn't trust the amazingly small amount of curry paste used, so I just did my own thing. FAIL. When I pulled my pot out of the oven after 3 hours, there was not one bit of liquid left. No sauce. Nothing. Being a pretty seasoned cook, I probably should have realized exactly this circumstance would occur, but I was feeling lazy. So, no, I didn't add liquids along the way like I should have. Plus, Chef Adria didn't tell me to. Maybe I should blame it on him. The beef was tender though. Really spicy (due to my heavy teaspoon with the curry paste), but tender. This one definitely needs a do-over once I get my hands on a pressure cooker. And it almost seems like my camera knew this was a failure because I don't have a single picture that is actually in focus. This is the only time this has ever happened. I think there are higher powers at work trying to tell me that I should learn to follow directions. 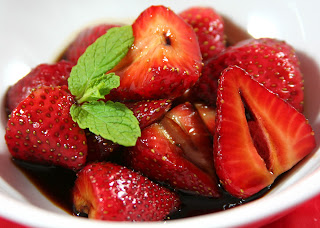 I'm not sure what to make of the strawberries. The recipe calls for Cabernet Sauvignon vinegar, which sounds like at least $20 per bottle, so I used the recommended substitute of balsamic vinegar. Hey, that's an actual dessert, right? Strawberries in balsamic vinegar? Well, it doesn't work here. I made the caramel syrup, which looked and smelled and tasted good, but after I added the balsamic, the vinegar killed everything. It was all you could taste. Sigh. This one may need a do-over, too. With Cabernet Savignon vinegar this time. Even though the vinegar will then sit in my pantry for the next 10 years without being touched again. Ah, the travails of cooking.