Eat What You Love: Paleo Snickerdoodles 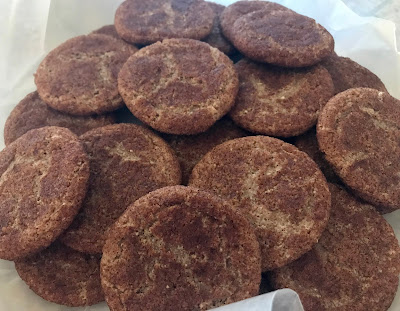 What do you do when you're invited to a cookie exchange, and your significant other only eats Paleo?  Well, apparently you cave in and make him a batch of his favorite cookies, Paleo-style.  I'll be honest: I was a little wary of these cookies.  I don't think it's a really cookie unless it has flour and sugar, and these definitely fail that sniff test.  However.  These are actually pretty delicious.  And that's coming from someone who loves herself some sugar.

Note: I used 4 tablespoons (½ stick) unsalted butter instead of the palm shortening.

Paleo Snickerdoodles
From Eat What You Love by Danielle Walker

In a food processor, combine the remaining 3 tablespoons maple sugar, the cashew flour, coconut flour, arrowroot, the remaining 2 teaspoons cinnamon, the cream of tartar, baking soda, and salt and pulse 5 times.  Add the maple syrup, palm shortening, and vanilla and process for 15 seconds, until combined.  Transfer the processor bowl to the fridge and chill the dough for 1 hour.

Preheat the oven to 350°F and line two baking sheets with parchment paper.

Using a tablespoon, scoop out the dough and roll it into balls, then roll the balls in the cinnamon sugar to coat.  Place on the prepared baking sheets, spacing them evenly to allow for spreading.

Bake one sheet at a time for 10 to 12 minutes, rotating the sheet halfway through baking, until the cookies are golden brown around the edges.  Cool the cookies on the sheets for 10 minutes, then transfer them to a wire rack to cool completely.

Store the cooled cookies in an airtight container in the refrigerator for 2 weeks, or in the freezer for 6 months.