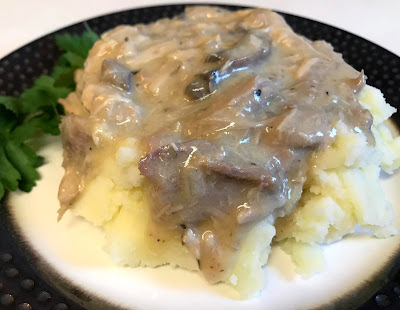 I just happened to be meandering around my local foodie grocery when I noticed something new and interesting in the frozen game section.  It was a pile of frozen pheasants.  I had never actually had pheasant, so of course I had to acquire some and try them out.  I quickly learned that pheasant is so lean, it's basically shoe leather after cooking.  Then I found this recipe, which ensures about as good of an outcome as you can hope for in such a lean bird.  You don't get to admire the beautiful pheasant pieces, but it's delicious and comforting on a cold day.

Place the pheasant pieces in the crock pot. Sprinkle with the onion and mushrooms.

In a bowl, combine the broth and flour until the flour is dissolved. Stir in the Worcestershire sauce, salt, garlic, 1 can of cream of chicken soup, and the dried herbs. Mix well. Pour over the pheasant.  Cover the crock pot and cook on low heat for 6 hours or until the pheasant is cooked.

Serve the pheasant with the gravy over noodles or rice.