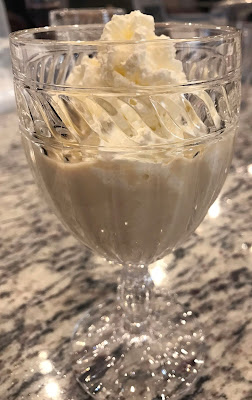 I've tried some eggnog recipes in the past, and they were just so over-the-top hit-you-in-the-face with the liquor that I was pretty much decided that eggnog wasn't for me.  Luckily, I decided to give it one more try this year with a recipe from Alton Brown, who has never failed me.  This version of eggnog is more like an adult milkshake than a fraternity party attempt to get as drunk as possible as fast as possible.  And adult milkshake is definitely more my speed.

Note: I used Maker's Mark bourbon, Bacardi dark rum, and V.S.O.P. cognac.  I aged the first batch about a month, the second about 10 days.  Both were amazing.

Separate the eggs and store the whites for another purpose.


Beat the yolks with the sugar and nutmeg in a large mixing bowl until the mixture lightens in color and falls off the whisk in a solid "ribbon."

Combine dairy, booze, and salt in a second bowl or pitcher and then slowly beat into the egg mixture.
Move to a large glass jar (or a couple of smaller ones) and store in the fridge for a minimum of 2 weeks. A month would be better, and two better still. In fact, there's nothing that says you couldn't age it a year, but I've just never been able to wait that long. (And yes, you can also drink it right away.)

Serve in mugs or cups topped with a little extra nutmeg grated right on top.
Posted by Sara at 9:04 PM