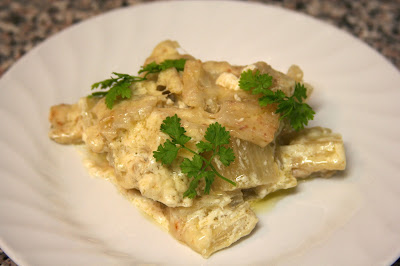 I think I have a problem.  Whenever I see some new or interesting thing at the grocery store, I just have to purchase it and cook it.  Am I a novelty addict?  Quite possibly.  It has, however, been three or four years since I first saw cardoons, and I have managed to hold off on purchasing them until now.  Cardoons (or "artichoke thistle") are a big celery-looking thing from Europe, mostly the Mediterranean area (read: Italy, Spain, and France).  It turns red when cut areas are exposed to air, so you have to work quickly.  You braise the stems in liquid, and they turn nice and tender and vaguely artichoke-y.  I decided to go with a more French preparation, because as we all know, everything tastes better covered in cheese and cream.

Note: The cream reduced itself while the cardoons were cooking, so I didn't end up needing to reduce it any further.

Place cream, stock, and bay leaf in a large saucepan and season to taste with salt and pepper. Wash cardoons, then remove and discard tough outer stalks. Cut away thorns and pull off stringy fibers. Cut cardoons into 1½- to 2-inch pieces, placing them immediately into cream mixture as you go, to prevent them from discoloring.

Bring cream mixture to a simmer over medium heat and cook, stirring occasionally, until cardoons are tender, about 1 hour. Using a slotted spoon, transfer cardoon pieces to individual gratin dishes (or a 1-quart baking dish).

Preheat oven to 350°F. Reduce cream mixture to about ¾ cup over medium heat, about 30 minutes. Discard bay leaf, stir in nutmeg, and divide reduced sauce equally between gratin dishes, sprinkle Gruyère cheese on top, and bake until golden and bubbly, about 30 minutes.