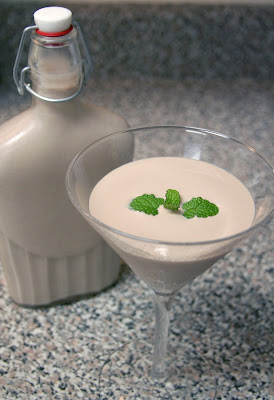 Somehow I've sort-of gotten in the habit of making an alcoholic concoction around the holidays.  Because there's apparently not enough alcohol going around at the moment, I need more.  But with this one I have an excuse.  One of my favorite liqueurs is Bailey's, so who can turn down the opportunity to make a Bailey's clone that will probably taste even more fantastic than the original?  Not this girl.  So that's exactly what I did.  And it does taste more fantastic.  It's pretty thick, so I may go with some added milk next time.  But for now I'm going with the idea that it's the holidays, and a little splurging is a-okay.

Note:  I used 2 Gingers Irish Whiskey because that's what the guy at the liquor store recommended.  I used Hershey's Special Dark chocolate syrup because that's what was in my fridge.  I used espresso granules because I thought that would taste better than cheap coffee crystals.  I upped my cream of coconut to ¼ cup and added 1 teaspoon coconut extract because I wanted mine to taste more like something I had at a local restaurant ("The Juice" @ III Forks).  As you can see, this recipe is pretty forgiving.  Do what makes you happy.

Combine first 5 ingredients in blender; blend until coffee crystals dissolve, about 1 minute. Add whipping cream and cream of coconut to mixture and blend 10 seconds. Transfer to pitcher; cover and refrigerate until cold, about 2 hours. (Can be prepared up to 2 weeks ahead, keep refrigerated). Fill wineglasses with ice cubes. Pour chilled mixture over ice cubes and serve immediately.