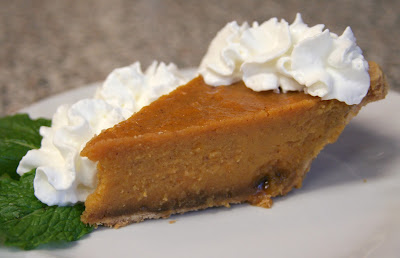 I remember back around Thanksgiving, there was a viral video of some guy reviewing a Patti LaBelle sweet potato pie he'd bought at Walmart.  Yes, Walmart.  People flooded the stores and bought every pie in sight.  At the time I thought I must be misreading the articles.  Seriously?  Over a pie at Walmart?  All the baked goods I've ever seen there look incredibly unappealing.  But these people were serious.  Well, come to find out the recipe for the pie is in an old cookbook Patti put out around 1999.  I decided I needed to try this magical pie that was sold out everywhere, but we already had a pumpkin pie lined up for Thanksgiving festivities.  So it's a little delayed, but delayed gratification is good, right?

Note: It seems like a lot of nutmeg.  It apparently freaks some people out. (Epicurious, I'm looking at you.) I promise it's the right amount.  It makes the pie delicious.  Also, I used a Marie Callender's frozen crust instead of following the recipe because I just didn't want to deal with rolling out a crust today.  I just wanted PIE.  And I think the Marie Callender's crusts are pretty darn good for frozen.

For the crust: Sift the flour and salt into a medium bowl. Add the shortening. Using a fork or a pastry blender, cut the shortening into the flour until the mixture resembles coarse crumbs with a few pea-sized bits. Stirring with the fork, gradually add enough of the water until the mixture clumps together (you may need more or less water). Gather up the dough and press into a thick disk. If desired, wrap the dough in wax paper and refrigerate for up to 1 hour.

Mash with an electric mixer on medium speed until very smooth. Measure 3 cups mashed sweet potatoes, keeping any extra for another use, and set aside.

Preheat the oven to 400°F. Uncover the pie shell and brush the interior with some of the melted butter. Sprinkle ¼ cup of the brown sugar over the bottom of the pie shell. Bake until the pie dough is set and just beginning to brown, about 15 minutes. If the pie shell puffs, do not prick it.

Reduce the oven temperature to 350°F. Bake until a knife inserted in the center of the filling comes out clean, about 1½ hours. Cool completely on a wire cake rack. Cover and refrigerate until ready to serve with whipped cream.
Posted by Sara at 7:44 PM