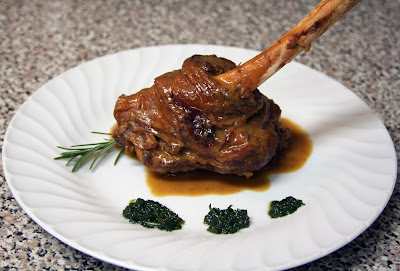 I only started eating lamb as an adult, mostly because it was still relatively exotic and expensive when I was a child.  And I've mostly stuck with lamb chops and the cubes in curry since then.  But a couple of years ago, I started eating at a Mediterranean restaurant that had braised lamb shanks, and my friends, those things are magical.  As in melt-like-butter-on-your-tongue magical.  So I decided to expand my little lamb kingdom and learn to make some super-tender lamb shanks.  I couldn't find a recipe for the ones I had at the restaurant, but this one looked pretty delicious.  And sure enough, these lamb shanks are incredibly tender and delicious.  Definitely worth the (3 hour) wait.

Note: Jamie seems to dislike standard measurements, and that irks me because I'm sure a man's hand is bigger than my hand. Two handfuls of raisins for me worked out to about ⅓ cup, and I used golden raisins because that's what I had in the pantry.  Oh, and a "lug" of olive oil?  I think he means "glug", but I would just go with a tablespoon or two.  I used about 4 sprigs of rosemary because mine were pretty long, like 8 or 9 inches each, and I'm convinced they don't have monster food in the UK like we do here.  I used Crosse & Blackwell orange marmalade because it's my favorite.  I went with 1 cup Guinness (close enough). I used 4 cups of Swanson Tuscan flavored chicken broth because it's been sitting in my pantry staring at me.  I added about a tablespoon of cider vinegar (a "splash") and ½ tablespoon of Worcestershire sauce at the end.  Make sure you liberally salt the whole thing - it needs it.

Put the lamb shanks into a really large casserole-type pan (roughly 26cm in diameter and 12cm deep) on a medium to high heat with a drizzle of olive oil – you can cook them in batches if needed. Turn them every few minutes; once they have some good colour, pick in the rosemary leaves and move them around in the pan to get crispy, but don’t let them burn. Use tongs to move the shanks to a dish and set aside.

Finely chop the onions and put them into the casserole with the rosemary and a lug of olive oil and a good pinch of salt and pepper.  Cook over a medium to high heat, stirring as you go, until the onions start to caramelize. Add the raisins and marmalade, then add the ketchup, Worcestershire sauce and booze. Give it all a good stir, then leave to gently simmer.  Use tongs to move the shanks into the pan of onions, then pour in all their juices. Add the stock, put the lid on, turn down the heat and leave to blip away slowly for around 3 hours, or until the meat falls off the bone easily. Try to turn the shanks halfway through so they cook evenly.

When the lamb shanks are ready, carefully move them to a platter, making sure the meat stays intact. Whiz or liquidize the gravy with a stick blender until smooth, then allow to reduce down and thicken. Quickly bash most of the mint leaves in a pestle and mortar with a good pinch of salt and the olive or rapeseed oil, then take to the table. Finely slice up the spring onions and toss on a plate with the remaining fresh mint leaves, a drizzle of cider vinegar, and a pinch of salt.

Add a little splash of cider vinegar and a few more splashes of Worcestershire sauce to the sauce, then ladle it all over the lamb shank and pour the rest into a jug for people to help themselves. Scatter the vinegary spring onions and a few fresh mint leaves all over the top, drizzle the mint oil all around the shanks, and serve with lovely potato and celeriac mash. The plate will be clean before you know it.