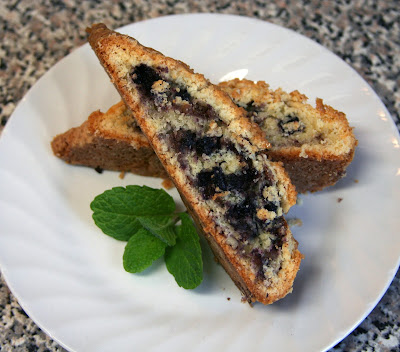 I recently became the proud owner of a set of recipe cards and recipe booklet that belonged to my grandmother.  Some of the recipes are pretty old, and some are pretty fantastically weird.  Just flipping through them is like getting sucked into a time warp.  But it can be a delicious time warp, and it makes me feel closer to the woman who is now unreachable due to Alzheimer's disease.  I never thought she was big on cooking, but my mom tells me that simply isn't true.  That my grandmother actually threw large dinner parties when I was too young to remember.  I decided I really needed to try something ASAP, and so I chose this breakfast bread as a start.  I wasn't expecting it to melt and spread the way it did (and ruin my lovely spiral!), but it actually tastes pretty awesome.  The dough is buttery and crumbly, the filling is tart and sweet, and the sugar on top crunches in just the right way.  It may not necessarily be a photographic stunner, but it's good in the belly.

Note:  I used pecans and dried blueberries in my roll, and it really was divine.

Sift flour with baking powder and salt.  Cut butter into flour until the mixture resembles cornmeal, then mix in sugar, lemon rind, and egg.  Add milk or half-and-half if mixture seems dry.

Toss dough on a lightly floured board and knead gently.  Roll into a rectangle about ¼-inch thick.

Mix together all filling ingredients except cinnamon and spread on the dough rectangle.  Sprinkle the filling with the cinnamon.  Roll up the dough lengthwise so that you get a long roll.  Place on a greased or Silpat-lined cookie sheet.  Brush the top with milk and sprinkle with demerara sugar.  Bake for 30 to 35 minutes.  Cool and cut.
Posted by Sara at 11:35 AM