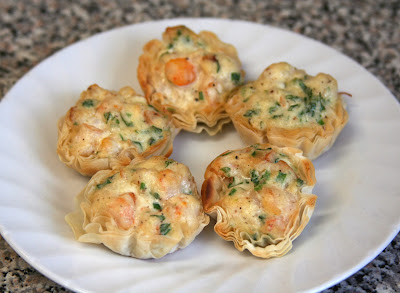 It's become a bit of a tradition in my family that on Christmas Eve we have a bunch of appetizers instead of a true dinner.  I'm certainly a big fan because I love having little bites of lots of different things instead of one main dish.  I'm very much in favor of novelty, at least as long as that novelty is delicious.  So when I saw a recipe for scallop puffs on the internet, I knew I wanted to try them.  A few small adjustments later, and I had a tasty tray of little bites to pass around.

Note:  The original recipe called for scallops, and I think that sounds absolutely delicious, but since I was making these for family, and some members of the family do not like scallops, shrimp were used instead.

In a saucepan melt the butter.  Once the butter begins to sizzle, add the shrimp and cook for about 3 minutes on each side, or just until they turn pink and lightly brown on the edges. Drain the shrimp and cut them into ½-inch pieces.

In a bowl whisk together the mayonnaise, the Gruyére, the mustard, the lemon juice, the parsley, the chives, and salt and pepper to taste, add the shrimp, and toss the mixture well.  In a small bowl beat the egg white until it just holds stiff peaks and fold it into the shrimp mixture gently but thoroughly.

Fill each phyllo tart shell with a heaping tablespoon of the shrimp mixture, arrange the puffs about ½ inch apart on baking sheets, and broil them under a preheated broiler about 6 inches from the heat for 1 to 2 minutes, or until the toppings are bubbling and lightly golden (do not allow the edges of the tarts to burn).