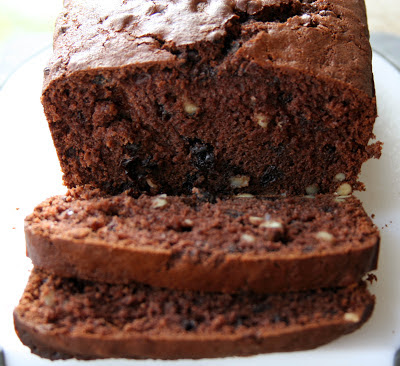 When my mom gave me a bag of dried cherries, I of course did what every other obsessive compulsive cook does: I immediately started thinking of a way to use them.  I could have done a cherry sauce with pork, I guess, but I really wanted something sweet.  Something evil.  Something that would make me forget that I couldn't communicate with the world in general.  So I started digging up quick bread recipes, and after much fiddling and referring to the Ratios of Baking (thank you Michael Ruhlman), I came up with a halfway decent recipe.  Okay, it's better than halfway decent.  I had to stop myself from going into the kitchen and swiping slices.  You know, where you cut a tiny slice, and you tell yourself that's it, but then you're back 10 minutes later, cutting another tiny slice?  Busted.

In a small bowl, soak the dried cherries in kirschwasser for 20 minutes.  Chop the cherries and reserve the soaking liquid.  In a medium bowl, combine the flour, cocoa, baking soda, baking powder, and salt.  Mix ½ cup of the flour mixture with the chocolate chips in a second small bowl.  Set aside.

In the bowl of a stand mixer, cream the butter and sugar.  Add the vanilla and mix well.  Mix in the eggs, one at a time, until combined.  Mix in ½ of the flour mixture, then the milk, then the remaining flour mixture.  With a rubber spatula, scrape the bowl, and then fold in the chocolate chips (coated in flour) and the walnuts.  Fold in the cherries and the soaking liquid.

Bake the loaf for 45 to 55 minutes, or until a toothpick inserted in the center comes out clean.