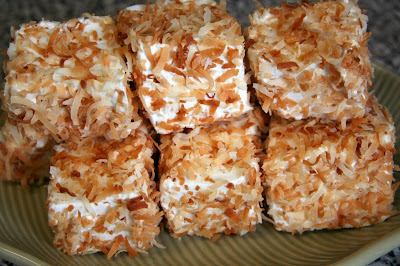 As I was happily pinning along the other day, I happened upon an idea that really struck me.  Instead of an advent calendar, you actually do something fun each day of December leading up to Christmas.  Things like driving around to look at lights or eating dinner by candlelight on the longest night of the year.  This kind of incredibly cheesy stuff is right up my alley.  So of course I immediately had to copy out everything and plan what I was going to do every day.

One of the ideas on the list was to make marshmallows from scratch.  I'd never made them before, and all I could think of was the giant sticky mess they would probably make.  But then I came across another pin, for a coconut version.  And who is going to turn down coconut marshmallows??  Not this girl.

Toast coconut on a baking sheet in the oven, stirring occasionally, until golden, about 7 minutes.  Remove from the oven and cool.  Break into smaller bits with your hands.

Sprinkle the gelatin over ½ cup of water in the bowl of an electric mixer and let soften while you make the syrup.

Combine the sugar, corn syrup, remaining ¼ cup water, and salt in a 1- to 2-quart heavy saucepan and heat over low heat, stirring, until the sugar has dissolved.  Bring to a boil over medium heat.  Insert a candy thermometer into the syrup and boil, without stirring, until it registers 240°F.  Remove from the heat and let stand until the bubbles reside.

With the mixer set at low speed, pour the hot syrup into the gelatin in a thin stream down the side of the bowl.  Increase the speed to high and beat until very thick, about 15 to 20 minutes.  Add the vanilla extract and beat for 1 minute more.

Spoon the marshmallow mixture over the toasted coconut in the baking pan and press evenly with dampened fingertips to smooth the top (it will be very sticky).  Sprinkle the top evenly with ½ cup toasted coconut.  Let stand, uncovered at room temperature, until firm, about 2 hours.

Unmold the marshmallow block onto a cutting board.  Cut into 1-inch squares and cover the sides with the remaining toasted coconut.  Store in an airtight container.