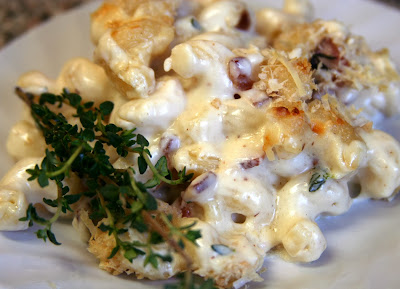 I have hated macaroni and cheese my entire life.  All we ever had growing up was that radioactive yellow stuff from the box, and I despised every bite.  I really thought I was just a weird mac and cheese hating person.  Turns out I just hate fake cheese.

I was feeling particularly ill today, and the only thing I could think of that would make me feel the slightest bit better was if I had a spoonful of melty cheese to put in my mouth.  Yes, I sometimes have these thoughts.  It seemed a bit uncivilized to just shovel some melted goo down my throat, so I figured that some pasta would make a nice vehicle for it.

At this point I was stuck, randomly wandering the internet looking for inspiration, when I came across another blog with a beautiful picture of macaroni and cheese.  And the blogger had used Thomas Keller's Bouchon cookbook.  Which was also sitting on my own cookbook shelf.  And who can I trust more than Thomas Keller to deliver a stunning macaroni and cheese?  No one.

Cook bacon in a large skillet over medium-high heat until brown.  Using a slotted spoon, remove to a plate lined with paper towels.  Set aside.

Add butter to the bacon fat left in the skillet.  Lower the heat to medium.  When the butter is melted, add the shallot.  Cook for 2 to 3 minutes, or until the shallot is translucent.  Sprinkle with the flour.  Allow the roux to cook for a minute or two, but do not let it burn or brown.  Slowly whisk in the milk and heavy cream.  Bring the mixture to a simmer and add the salt, bay leaf, cloves, and white pepper.  Lower the heat to medium low and continue to stir until the mixture thickens.

Remove the bay leaf and cloves; discard.  Add the Comte cheese, thyme, truffle oil, and nutmeg.  Stir until the cheese is completely melted.  Fold in the cooked cavatappi and the bacon.  Pour the mixture into a large casserole dish.  Sprinkle with Parmegiano-Reggiano and panko.

Bake for 20 minutes, or until the sauce is bubbly.  Set the oven to broil and cook until the top is  browned.