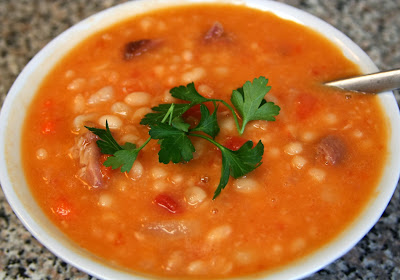 My mom has several recipes that aren't written down anywhere except in her neurons.  Since she only makes these recipes about once a year, it's been a bit of a chore to try and get some notes down.  She's also really bad about making the recipes and then telling me about it.

This soup only makes an appearance when it's cold and when there's the remains of a ham sitting in the fridge.  Which means we get this around Thanksgiving or Easter.  Unless a rogue ham makes an appearance at dinner one night.  Luckily the stars aligned, I got notes on the soup, and managed to wrangle some out of my dad's hands for a picture.

This soup means cold weather to me, and I could eat about a gallon at a sitting.  My mom doesn't know where she got the recipe from originally, so to me it has always just been My Mom's Soup.  My mom's soup that causes extreme family discord as we all try and knock each other down to get the last bowlful.

Rinse the dry beans and pick out any bad ones.  Soak the beans overnight in enough water to cover about an inch over the level of the beans.

Empty the beans and water into a colander; rinse the beans under fresh water.  Put the beans in a large pot and cover with water, about halfway up the side of the pot.  Add the ham bone, bay leaf, salt, and peppercorns.  Cover and simmer for 1 hour.