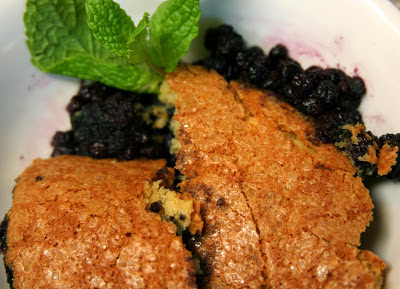 I'm not a huge fan of blueberries.  This is because...okay, I'm just going to go there.  They remind me of peas.  Stick with me now.  They both have that tight little skin housing an incredibly squishy center, and when you bite down, all this goo explodes in your mouth.  It's a texture thing, okay?  But I'm okay with cooked blueberries, because then they're just mush.  And somehow that's not a texture issue.  I also get around my paranoia by getting wild blueberries, which are pretty tiny.  So the exploding goo factor is much smaller.

When I first saw the recipe for blueberry cobbler, I of course immediate recoiled.  Then I realized that the blueberries would cook down and form this luscious syrup under a buttermilk biscuit topping.  Which is very okay with me.  So I found a giant bag of frozen wild blueberries (Wyman's at Sprouts...who knew?) and went to town.  And it was everything I hoped it would be.  Sweet gooey blueberries with a tender cobbler topping and a slight crunchy top from the sugar.  Fabulous.

In a large bowl, combine the blueberries, sugar, and cinnamon.  Spoon into an oiled 13x9-inch baking dish.

In a large bowl, cream the butter and sugar until light.  Beat in the egg and vanilla.

In a separate bowl, combine the flour, baking soda, cream of tartar, and salt.  Add the dry ingredients to the butter mixture alternately with the buttermilk in three additions, ending with flour.

Spoon the batter on top of the blueberries (drop the batter from the spoon instead of spreading), leaving space around the edge so the fruit juices can bubble up.  Sprinkle with coarse sugar.

Bake for 40 to 45 minutes, or until the topping is cooked through and browned, and the fruit is juicy and bubbling on the sides.