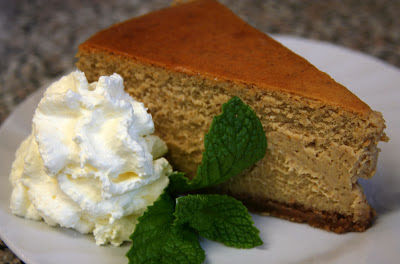 Every Thanksgiving we have the same pumpkin pie.  And, don't get me wrong, it's good.  It's just...tired.  I have a notoriously short attention span, and pumpkin pie lost me a couple of years ago.  So did most of the rest of the dinner, but that's a bit easier to change up.  You take away pumpkin pie, and people get angry.  It's stepping on tradition.  It's spitting on the recipe passed down from your mother's mother's mother.  Okay, maybe not that far, but you see what I mean.  So this year I didn't stray far.  I stayed in the pumpkin pasture.  But I goosed it a little.  Okay, a lot.  But it's still pumpkin.

Cheesecakes are difficult to get right.  I'm talking about the cracks on top.  Yes, I mean the ones on the last cheesecake you made.  Okay, and the last cheesecake I made.  Caught me.  Anyway, any recipe that doesn't include instructions for a water bath should be looked upon with great suspicion.  So I did my darnedest to set one up.  Except I don't own a roasting pan.  Or anything close to being big enough to hold a 9-inch springform pan with lots of clearance.  So I improvised with my glass lasagne pan.  And hey, no cracks.  I did have a bit of a scare when water somehow sneakily leaked in between the foil and my springform pan, but luckily the $20 I spent on the pan was worth it.  And after waiting forever for it to cool down in the fridge, I had a piece of creamy pumpkiny goodness all to myself.  I thank my short attention span.

For the crust
Preheat the oven to 325°F.  Spray the bottom and sides of a 9-inch springform pan evenly with nonstick spray.

In the bowl of a food processor fitted with the metal blade, pulse the graham crackers, pecans, sugar, and spices until evenly and finely ground, about fifteen 2-second pulses.  Transfer to a medium bowl, drizzle melted butter over, and mix until evenly moistened.  Transfer the crumbs to the springform pan and press the crumbs evenly into the bottom and a ½ inch up the sides of the pan.  Bake until fragrant and browned about the edges, about 15 minutes.  Cool on a wire rack while making the filling.

For the filling
Bring about 4 quarts of water to a simmer in a stockpot for the water bath.  Whisk together the sugar, spices, and salt in a small bowl; set aside.