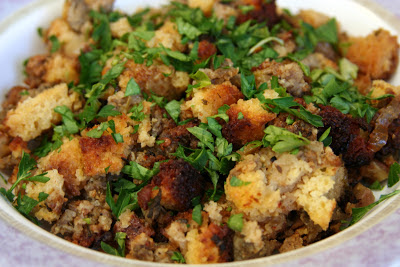 I didn't realize this, but apparently there are two warring factions when it comes to what is served next to the turkey at Thanksgiving: stuffing versus dressing.  Aren't they the same thing?  Oh, no, my friend they are not, as I was very quickly informed.  Apparently stuffing is made with crappy white bread and is only served by Yankees who don't know any better.  That would be me, since I was raised on Stove Top, which is...stuffing.  Then there's dressing, which is made with cornbread and is superior to any other form of side dish since it is lovingly made by someone's granny from a recipe passed down from before the Civil War.  Oh boy, was I in trouble.  I wisely kept my mouth shut during this altercation, but I nearly tripped myself in my rush to get to the computer and Google an appropriate dressing recipe so as not to offend the generations of Southern women who had come before me.

I had never made a stuffing or a dressing that I had liked because they all seem to turn out tasting like cardboard.  Those little bags of Pepperidge Farm stuffing cubes?  Yeah, tasteless, even with chicken broth poured over them and tossed with sauteed onions and celery.  Then I realized I was going about everything the wrong way.  I needed to follow my own advice.  The one that says everything tastes better with bacon (or sausage or ham).  If a pork product couldn't make dressing delicious, then it wasn't possible.  Well, it did make the dressing fabulous.  It also helped that at every turn I dumped as much seasoning into the darn thing as I could.  And I finally turned out a side dish I wouldn't be ashamed to set on the table next to the turkey.

Spread the corn bread and white bread out on a baking sheet.  Toast in the oven until light golden brown and dry to the touch, about 20 minutes.  Set aside.

In a sauté pan over medium heat, brown the sausage, stirring and crumbling, until cooked through, about 10 minutes.  Transfer to a large bowl.  Drain the grease from the pan.

Transfer the dressing to the prepared dish, cover with aluminum foil, and bake for 40 minutes.  Remove the foil and continue baking until browned and crispy, about 35 minutes more.