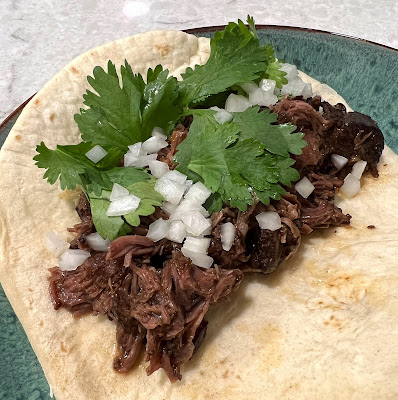 My absolute favorite taco at Taco Cabana is the beef barbacoa breakfast taco.  I love that thing deeply and passionately, especially with cheese and salsa ranch on top.  But for some reason, I never thought to make my own.  I figured it was just a braise, but it just seemed like a lot.  That is, until I found this recipe.  The whole thing gets taken care of in the slow cooker, and you just show up at the end to eat the delicious food.  That is definitely a recipe I can get on board with.
Note: I was convinced that six hours wasn't going to be enough to make this beef delicious, but it absolutely was.  The pieces were falling apart as I tried to lift them from the sauce.  I used a Shiner Bock in my version, but I think Rick Bayless says Modelo Negra is also a good choice.  It looks like he's further tinkered with the recipe since I grabbed it; the version below is what I made.

For the optional lining of the slow cooker:
A 12-inch chunk of agave leaf (penca de maguey) OR a dozen or so good-size avocado leaves (available at Mexican groceries) OR a 2-foot piece of banana leaf
For the beef:
2 tablespoons vegetable oil or freshly rendered pork lard
3 pounds beef cheeks
1 (12-ounce) bottle of beer
Salt

For serving:
Your favorite hot sauce or salsa
A little chopped white onion
A handful of cilantro leaves

Roast the agave leaf being careful not to touch the exposed flesh of the agave) over an open flame, turning every few minutes until pliable and charred, 10 to 15 minutes, depending on the thickness. (If using a banana leaf, run it briefly over an open flame to soften it.) Cut into 3 pieces. If using avocado leaves, scatter half of them on the bottom of the slow-cooker and set the others aside.

In a large (12-inch) skillet, heat the oil over medium-high. Pat the beef dry with a paper towel, sprinkle generously with salt and lay it in the skillet. Cook, turning occasionally, until richly brown on all sides, about 10 minutes. Transfer the meat to the slow cooker.

Combine all the marinade ingredients in a blender with 2 cups of water and blend to a smooth puree. Pour through a medium mesh strainer into the slow cooker. Nestle the pieces of agave leaf or banana leaf under and around the meat, if you are using them, and pour the beer over the top. Cover with the remaining avocado leaves, if using. Cover and turn on the slow cooker to high. Your barbacoa will be done in about 6 hours, though you can hold it for longer.
When you are ready to serve, coarsely shred the beef and arrange it on a warm platter. Skim any fat from the sauce that remains in the slow cooker, then taste it. If you feel it would be better with a more concentrated flavor, pour it into a medium saucepan or remove the insert and set it over high heat. Boil for a few minutes to reduce that quantity, then taste and season with salt if it needs it. Spoon as much as you like over the beef. (I like to sprinkle coarse salt over the meat at this point.) Serve the barbacoa with the hot sauce or salsa, onion, and cilantro. Grab some tortillas, if you like, and you’re ready to make some delicious tacos.