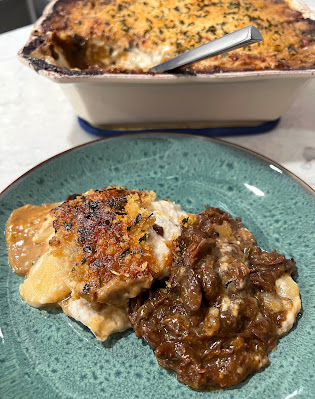 I am the first one to say that this casserole is an...undertaking.  Luckily, most of the actual cooking happens without you having to be much involved, so that does help.  And while it does look like a lot of ingredients, they help to build layers of flavor that come together in a really beautiful way in the final product.
Also, unfortunately, the original blogger who created this work of art, Kay of Kayotic Kitchen in the Netherlands, has taken down her site, so the below was only possible after trolling the Way Back Machine for old archives.  I've included the link below, as usual, just in case she brings everything back up again at some point.
Note: The original recipe used something called Kruidenbuiltje voor Vleesbouillon by a company called Honig.  I did a little googling, and it's almost impossible to find, at least if you don't want to spend ten times as much in shipping.  In looking at the ingredients of this "herb seasoning for meat stock", I found that the Lawry's 17 Seasoning has a lot of the same herbs/spices.  I don't know what the original tastes like, but mine was delicious.  Also, they frequently use a syrup called stroop in stews and braises from that part of Europe, and the closest US replacement is the molasses called for below.  If you're got some wonderful stroop you'd like to add instead, feel free.
Autumn Stew Casserole
Adapted from Kayotic Kitchen blog

Day 1:
Season the beef with 2 teaspoons of the kosher salt and 2 teaspoons of the black pepper.  In a large Dutch oven over medium to medium-high heat, brown meat in oil in batches, transferring the finished batches to a bowl.
Once meat is all browned, add 2 tablespoons of the butter and the onions to the Dutch oven.  Cook, scraping the bottom of the pot, until the onions are slightly translucent and fragrant.  Add the garlic, bay leaves, cloves, and seasoning mix, and cook for a minute before adding the beef back into the pot.  Then add the molasses and beef stock.
Cover and cook on low, covered, for 3 to 4 hours, or until beef is tender.  Remove bay leaves and cloves and discard.  Allow stew to cool on the stovetop for about 30 minutes, uncovered, then cover and refrigerate.
Day 2:
Preheat oven to 350°F.  Remove Dutch oven from refrigerator.  Remove any fat that may have collected on the top and discard.  Set stew aside.
In a medium frying pan, melt remaining 3 tablespoons of butter.  Add the sliced mushrooms, remaining ½ teaspoon kosher salt and ¼ teaspoon black pepper.  Sauté mushrooms until they release their water, then add the thyme and marjoram.  Continue to cook until the liquid has evaporated and the mushrooms are starting to brown.  Add the mushrooms to the Dutch oven with the stew meat.
Place the Dutch oven over medium heat and begin reheating the stew.  Add 1 cup of water if they stew appears dry.  You want enough liquid to make a gravy.
While stew is reheating, peel potatoes and slice thinly on a mandoline; set aside.  In a medium bowl, mix together mushroom soup, sour cream, milk, seasoned salt, and remaining ¼ teaspoon black pepper; set aside.
When stew is hot, place cornstarch in a small bowl, and then add liquid from the stew to form a paste.  Add the paste to the stew and mix well; the stew gravy will start to thicken.
Once the stew is thickened to your liking, spoon the meat mixture into the bottom of a casserole dish.  Layer half of the sliced potatoes on top of the beef, then spread half of the soup mixture on top of the potatoes.  Layer on the remaining potatoes and once again spread the remaining soup over the top.  Sprinkle with the cheese, panko, and parsley.
Spray a piece of aluminum foil with oil and cover the casserole (to prevent sticking).  Bake, covered, for 45 minutes.  Remove the foil and bake uncovered for another 45 minutes, until the top is golden brown and the potatoes are fully cooked.
Makes 4 to 6 servings
Posted by Sara at 5:39 PM