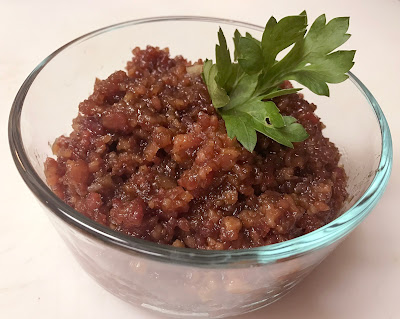 I think Facebook is going to be my downfall.  Not because of the angry political rants.  Not because of the endless pictures of people's children.  Not because of the god awful selfies.  No, it will be my downfall because of the ridiculous amount of cooking videos that regularly swarm my newsfeed.  And when that video involved a chef making a big 'ol pot of bacon jam for his fried green tomato burger, I couldn't get to the store fast enough.  I have found the ultimate perfection of the pig, and this is it.  Smear it on everything.  I did a gorgeous grilled cheese stuffed with this stuff, and based on my groans, my downstairs neighbor probably thought I was dying.

Increase heat to high; add bourbon and maple syrup. Bring to a boil, scraping up browned bits. Add vinegar and brown sugar and return to a boil. Add reserved bacon; reduce heat to low. Simmer, stirring occasionally, until liquid reduces to a thick glaze, about 10 minutes.  Add salt to taste if the bacon isn't very salty.

Transfer mixture to a food processor and pulse until it has the consistency of a chunky jam. Refrigerate in an airtight container at least 1 hour and up to 4 weeks.