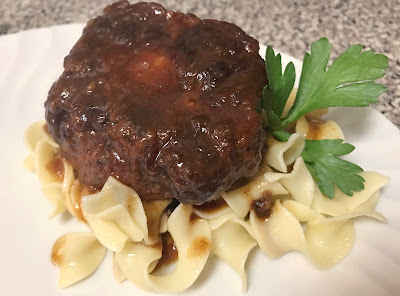 I've been secretly plotting to make this recipe for, oh, about a year now.  No, I am not crazy.  You see, Heston Blumenthal recipes require planning.  They require the acquisition of large lists of ingredients.  They require me to try and find oxtails for something approaching a reasonable price, as the butchering world has now decided that they're very fancy indeed.  They also require a day with the right temperature for optimal enjoyment.  So basically, today was a day ordained by the stars for imbibing oxtail stew.  And yes, it was everything I've always wanted in an oxtail stew.  Deep, rich flavor; fall-apart tender beef; delicious gravy.  Recommended for those who like kitchen projects or impressing people (like your parents).

Note: I used Pinot noir for the red wine, Chardonnay for the white.  I have attempted to convert the British weights into American equivalents, but honestly, just use your kitchen scale.  It can do grams.  And it's so much more accurate.

At least two days before serving, prepare the marinade. Place the spices, orange zest, and black pepper in muslin and tie into a little parcel. (Although this is not essential, it is not especially pleasurable to chew on a whole peppercorn.) Peel, top and tail the carrots, then quarter them lengthwise. Peel and quarter the onions (by keeping them in larger pieces, it's easier to remove them later).

Take a casserole large enough to contain all the ingredients for the stew and place it over medium heat. Add 3 tablespoons of the butter and about the same quantity of peanut oil. Add the carrots and, when they begin to brown, add the onions and continue cooking until both the carrots and onions have turned a light golden brown.

Chop the leek and celery and add to the pan. Cut the head of garlic in half, then add this, too (there's no need to bother peeling it or anything). Cook on medium heat for another 10 minutes, then stir in the tomato paste. Cook for a further five minutes, stirring all the time, then remove from the heat and set aside.

Finely slice the mushrooms and in another pan sauté them in 5 tablespoons of butter until they have released all of their liquid and turned brown. Drain off the excess fat and add to the vegetable mix in the large pan.

Take a casserole or frying pan that is large enough to accommodate the tomatoes, flesh-side down, in one layer with a little more of the peanut oil. Place the pan on medium heat and leave until the pan side of the tomatoes turns dark brown. Add the sherry vinegar and stand back - if you do not, it will feel as if someone has just sprayed horseradish up your nose. Leave the vinegar to boil off, then add the white wine. Bring to the boil and reduce until a syrupy mush is left. The pan will need to be stirred while the wine is reducing. Scrape this mix into the pan with the other vegetables.

Pat the pieces of oxtail dry and toss them in the flour. Dust off any excess flour, then season generously. Heat a couple of tablespoons of peanut oil in a large casserole. Add the oxtail and brown over high heat, turning regularly. Do this in several batches, to facilitate even browning. If necessary, change the oil in the pan so that the pieces of oxtail are not being browned in burned oil. Drain the browned pieces of oxtail on kitchen paper and add them to the pot of cooked ingredients.


Place the pan in which the meat was browned on high heat and, after a few minutes, pour in the port. Bring to the boil, the whole time scraping any meat residue off the bottom and sides of the pan, and as soon as the liquid boils, flame and reduce it by half. Add the red wine and repeat the process, again reducing by half. The alcohol will be difficult to ignite unless it is boiling.

Add this to the other pan containing the meat and vegetables, carefully combining the ingredients, and leave to marinate in a cool place for 24 hours. It is important that the meat is completely covered by the marinade, so it might be necessary to add a little cold water.

Preheat the oven to 200°F. On the top of the stove, place the casserole on high heat and bring the liquid to the boil, making sure to scrape the bottom of the pan to stop the contents burning. Skim off any impurities that rise to the surface, remove from the heat and lay a pierced piece of parchment paper on the surface of the liquid in the pan.

Place the pan in the oven for a minimum of seven hours, checking occasionally and topping up with water if the level of liquid has dropped too much. And I mean seven hours - this is the minimum time that should be set aside to cook the oxtail; longer will be even better.

Once cooked, remove the pan from the heat and allow to cool. When warm, carefully remove the pieces of oxtail with a slotted spoon and place them on a tray.

Return the pan to the heat for five to 10 minutes, and then pour into a smaller pan through a double layer of dampened muslin. Reduce this liquid to somewhere between ¾ cup and 1 cup, then remove from the heat and leave to cool a little before putting back the meat.

Cook the sugar in a small pan on high heat until it caramelizes - on no account let it burn, so watch it carefully - then add the red-wine vinegar, stir, reduce to a syrup and add this to the reduced cooking liquid with the oxtail. Stir carefully to combine, then leave to stand for five to 10 minutes before serving. You may need to reduce the liquid to a sauce consistency.