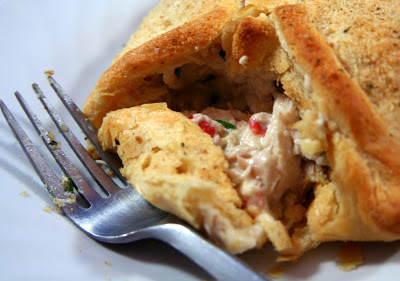 My sister wasn't as enamored of cooking as I was at a young age.  She got the rudiments from my mother, as we all did, but it just didn't interest her.  However, at some point she decided that cooking was mildly interesting, and she started looking at recipes and playing around with some basic ideas.  And one of the first things I remember her picking out and making on her own were chicken packets.

Her recipe was pretty simple: chicken with some cream cheese and butter in a crescent roll.  I'm not sure where she originally found it, but it was pretty decent.  I always thought it was missing something though.  It was kind of one note.  Then I started crawling around the internet looking for the original source, and I found a much more interesting recipe with everything I was missing.  This one had flavor and color and interest.  I'm not sure if my sister left out the pimentos and chives and things because as children that was too foreign, but this "adult" version is delicious and easy for a weeknight dinner.  I added Creole seasoning because...well, I don't like boring.