A New Turn in the South: Lemonade with Vanilla, Mint, and Rosemary 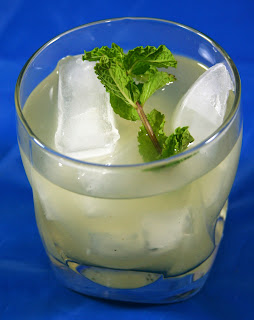 For something as simple as lemonade, I have been completely incapable of making it taste good.  I'm not sure why that is.  I mean, it's just lemon juice and simple syrup, right?  It just never worked for me.

When I saw this fancy lemonade recipe in my new cookbook, I immediately wanted to try it, but then I started to doubt myself.  Would it just turn out gross like the others I had made?  Would it be super sour?  I decided to trust Chef Acheson and see what happened.

The lemonade is very good, but very fancy.  People who are scared of new flavors probably wouldn't like it. There's a lot going on.  But it's a good lot.  It's incredibly refreshing and interesting.  And I think you could probably leave out the mint, vanilla bean, and rosemary if you wanted something simple and good.

Lemonade with Vanilla, Mint, and Rosemary
From A New Turn in the South by Hugh Acheson

Pour the water in a large pot over high heat and bring to a boil.  While the water is coming to a boil, halve the lemons and juice them thoroughly.  Place the juice and the juiced lemon halves in a large heat-proof nonreactive pot.  Add the sugar, 2 sprigs of mint, the vanilla seeds and pod, and the rosemary.

Pour the boiling water over the mixture.  Stir carefully and let sit for 20 minutes.  Stir well again and strain out the solids, then discard them and pour the lemonade into Mason jars or a large pitcher and keep refrigerated until people get thirsty.

To serve, pour the lemonade over ice in tall glasses, garnish each with a mint leaf, and sit on a porch.