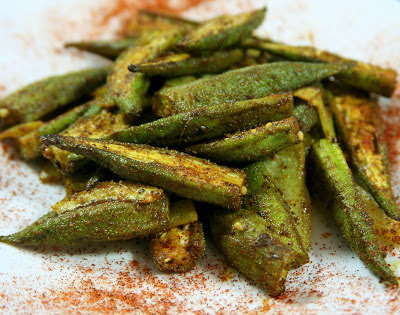 I didn't learn to love okra until I was in my late twenties.  My mother always tried to ply me with baked fried okra that came from a freezer bag, but I was having none of it.  I mean, they're slimy inside.  Eww.  That is a texture that no food should have.  Ever.

I didn't start to love okra until I found myself eating them at an Indian restaurant.  The pods were sliced in half lengthwise, and they were tossed with spices and cooked with caramelized onions.  They were fabulous.  Unfortunately, I had no idea how to make them at home.  I found a couple of recipes and pre-measured mixes, but it never really came together for me.  But then I happened across a brief suggestion on Pinterest about how to bake okra, and I was off running.

You really need to follow the instructions about washing the okra and then making sure it's completely dry.  Any wetness on the pods will just increase the slime exponentially.  And we don't like slime.

Preheat the oven to 425°F.  Line a baking sheet with aluminum foil or parchment paper.

Wash the okra at least an hour before cooking it.  Any water that remains on the okra will make it slimy.  When it is dry, cut the cap off and halve each pod lengthwise.

In a medium bowl, toss the okra with the remaining ingredients.  Bake for 10 to 15 minutes, or until the okra and onions are tender.