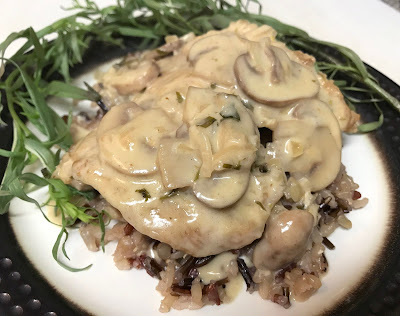 What do you do with a half bottle of Champagne left over from your New Year's Eve celebrations?  Well, you certainly don't throw it out.  I scoured the internet for ideas, but I kept coming back to a reference to a dish that was popular at La Caravelle restaurant in New York City before it closed back in 2004.  The dish was apparently renamed "White House Chicken" due to its popularity with John F. Kennedy, a famous patron in the 60's, but it was originally Chicken in Champagne Sauce.  No recipe has been published (at least not where I could find one), so I pulled together something delicious from the inspiration.

Note: Feel free to replace the chicken thighs with one whole chicken, cut into eight pieces.

Sprinkle the chicken thighs on both sides with salt and pepper to season.  In a large frying pan, over medium-high heat, heat canola oil to shimmering.  Add the chicken thighs and cook on both sides until golden brown.  Remove browned thighs to a plate and set aside.  Pour out any excess oil in the pan, but do not wipe out the pan.  In the same pan, melt the butter and add the mushrooms and shallots, and cook for about 10 minutes, until the mushrooms are soft and any liquid they have released is evaporated.

Add the champagne to the pan to deglaze (if needed, use a wooden spoon to scrape the bottom of the pan), then add the chicken stock.  Bring to a boil and cook for 10 to 12 minutes, until only about a cup of liquid remains.  Reduce heat to medium, then add the cream, salt, white pepper, tarragon, and the lemon juice and stir well.  Bring to a simmer, then add back the chicken thighs, ensuring they are coated in the sauce.  Cook for approximately 12 more minutes, or until sauce thickens and chicken is cooked through.  Serve with rice.