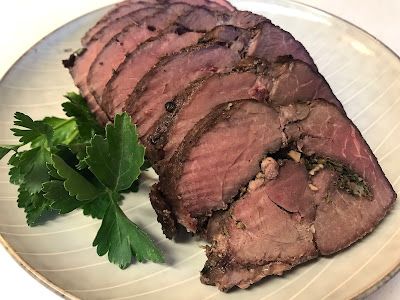 About two years ago, I noticed that my local grocery was offering something new and interesting: a mini boar roast.  Now, I love pork products in all their forms, but I hadn't had a lot of exposure to wild boar.  So I didn't grab the roast for a while.  Finally I gave in and picked one up, but I wasn't sure if boar cooked the same way as pork.  I shouldn't have worried.  The recipe below turns out a flavorful roast, and if you get the D'Artagnan version, the meat is mild and tender.

Mini Wild Boar Roast
Adapted from a comment at D'Artagnan

Generously season the center of the unrolled roast with ½ teaspoon salt and ¼ teaspoon black pepper, sprinkle with dried savory, and then smear with the sautéed garlic and rosemary. Roll and re-tie the roast, put it in the lardy pan from cooking the garlic and rosemary, rolling it around to fully coat in grease, and season the outside of the roast all over with the remaining salt and pepper.

Roast the boar until a meat thermometer registers 145°F, about 1 hour. Take the roast out of the pan and transfer it to a dish, and then heat the remaining lard in the same roasting pan. Sear the roast on all sides until browned. Let rest for 10 minutes before slicing.