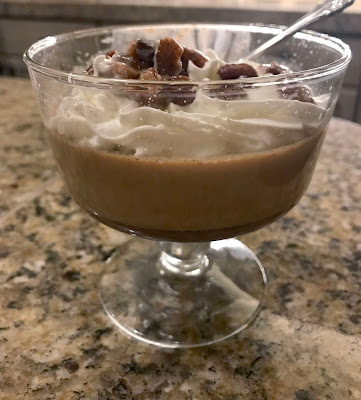 Every once in a while I give in and give up my sweet sugary delights for something a little easier on the ol' insulin.  And when I'm in these moods, I tend to gravitate towards Danielle Walker's cookbooks, as I have yet to taste anything of hers that is not pretty darn spectacular, despite the lack of flour and sugar.  This recipe is not any different.  If I didn't tell you that this was a Paleo dessert, I'm not sure you would guess.

Note:  Since I'm not averse to dairy, I substituted heavy cream for the coconut milk in the ganache and caramel.  I used whole milk instead of the almond milk and coconut milk in the panna cotta.  I also used 1 tablespoon of vanilla bean paste instead of scraping a vanilla bean.  When I made the spiced candied pecans the first time, they burned.  I recommend backing off to about 10 minutes cooking time and watching them closely.  I'm also not sure why you need 16-ounce serving glasses.  I used 12-ounce mini trifle bowls, and it fit just fine.

To make the ganache, combine the chocolate, coconut milk, and maple syrup in a glass bowl set over a saucepan with 2 inches of water in it, creating a double boiler.  Bring the water to a boil and whisk until the chocolate has melted and the mixture is smooth.  Divide the chocolate mixture evenly among 4 (16-ounce) glasses and place them in the refrigerator to set while you make the caramel and panna cotta.

To make the salted caramel, in a small saucepan, whisk together the coconut sugar, water, and salt and place over medium-high heat.  Simmer for 5 to 7 minutes, until the mixture turns a dark amber color and a candy thermometer reads 240°F.  Remove from the heat and immediately whisk in the coconut milk.  Set aside to cool.

To make the panna cotta, pour ½ cup of the almond milk into a bowl and sprinkle the gelatin over the top.  Let it sit for 5 minutes to bloom.  Meanwhile, heat the remaining ½ cup almond milk, coconut milk, and vanilla bean seeds and pod in a saucepan over medium-high heat until barely simmering.  Take the saucepan off the heat and whisk in the gelatin mixture until fully dissolved.  Whisk in the salted caramel mixture until fully incorporated.  Set aside to cool for 10 minutes.

To make the spiced pecans, preheat the oven to 350°F.  Line a baking sheet with parchment paper.  In a bowl, combine the pecans, maple syrup, cayenne, and salt.  Pour the mixture onto the prepared baking sheet and bake for 15 minutes.  Remove from the oven and let cool.

Remove the glasses from the refrigerator and divide the salted caramel panna cotta mixture evenly over the cooled chocolate.  Cover the glasses with plastic wrap pressed directly onto the panna cotta and refrigerate for 6 hours to set.  Serve with the spiced candied pecans sprinkled on top.