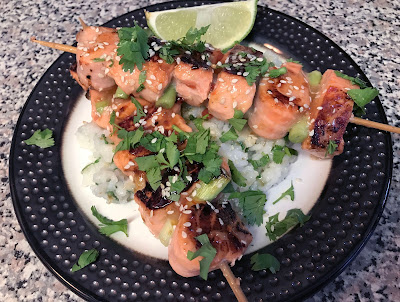 I realized the other day that I haven't made fish in a while.  And I love fish.  That situation needed to be remedied.  So I'm playing around on Pinterest, and I see this lovely photo of this tender pink salmon, glistening and beckoning to me.  And it was like fate, because I had all of the ingredients except the fish.  I love how that works.  So I went to the store, and it was like double fate, because they had this beautiful wild coho salmon on sale.  This recipe doesn't look like much, but it's fantastic.  I really struggled with marking this as four servings because I honestly shoved two skewers in my greedy little mouth.  Maybe have a bunch of veggies ready on the side when you serve this for more than two hungry people.

Note:  Next time I think I'll double skewer these, because the fish cubes went a little wonky each time I turned the kebabs.  A double skewer setup would probably stabilize the delicate fish a bit more.  Live and learn.

Place the salmon in a bowl and season with salt and pepper, then cover with the sweet chili sauce, tossing well to coat. Take the chunks and skewer them with about 3 or 4 pieces of green onion in between (5 to 6 salmon chunks per skewer), beginning and ending with the salmon.

Heat a large skillet or grill pan over medium-high heat and add the coconut oil. Place the skewers in the skillet and cook until opaque and golden on all sides, about 1 to 2 minutes per side. Remove the salmon and place it on a plate. Brush with extra sweet chili sauce, drizzle with the toasted sesame oil, and sprinkle with the cilantro and sesame seeds. Finish with a spritz of lime. Serve over coconut cilantro rice with lime wedges and extra chili sauce on the side.

Heat a saucepan over medium-high heat and add rice, coconut milk, water and salt. Stir, then bring to a boil. Reduce the heat to low, cover and let cook for 15 to 18 minutes, until liquid is absorbed. Fluff with a fork, then stir in coconut oil. Stir in the cilantro and serve.
Posted by Sara at 8:41 PM