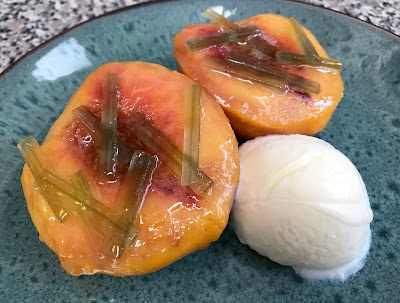 Ever since I saw the movie Haute Cuisine, I've been looking for the recipes of the woman depicted in the film: Danièle Mazet-Delpeuch, who served as chef to François Mitterrand, President of France, in the late eighties.  Unfortunately, the only cookbook I could obtain is entirely in French, with no English translation available.  Thank goodness for Google translator.  And since it is most certainly peach season here in Texas, I thought this was a lovely place to start sampling the beautiful foods that Ms. Mazet-Delpeuch brought to the French presidential palace.

Note: Since angelica liquor is basically unobtainable here in the US, I used St. Germain as a substitute this time around.  And I assumed that 1 small glass = one shot.  And of course I have plans of planting my own patch of angelica to make my own liquor in the future.  I found the candied angelica on Amazon.

Peel the peaches and reserve in a bowl of water with lemon to avoid darkening. Julienne the candied angelica. Melt butter over low heat in a pan. Sauté peaches, two or three at a time, letting color slightly (about 10 minutes).

When all peaches are roasted, reunite them in the pan, then sprinkle in the sugar and slightly caramelize the peaches, turning them in their juice. Set aside the peaches and keep them warm. Deglaze the pan with a glass of angelica liquor and add the julienned angelica.

Arrange the peaches on plates, accompanied by a scoop of ice cream. Drizzle with hot juice. Serve immediately.

Portions for 8 people
Posted by Sara at 8:45 PM