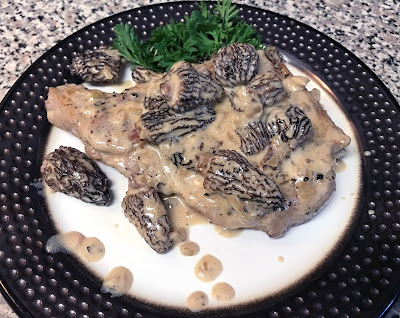 I can't believe there were still morels at the store the other day.  It's like some sadistic deity knew that I was trying to stick to a budget, and that $20 in morels was not part of that budget.  So that deity flaunted the beauty that is nature's bounty right in my shocked little face.  And of course I gave right in and bought them.  And because there hasn't been enough pork in my life lately (**sarcasm**), I cooked those morels with some super-tender pork chops, thus achieving nirvana and became one with the sadistic deity.

In a large heavy bottomed skillet add the olive oil and bring to high heat. Season pork chops with salt and pepper and add to the pan. Cook 2 to 3 minutes per side until golden brown and seared. Remove to a plate and set aside.

Add butter to the pan and add morel mushrooms. Saute in butter until mushrooms are tender, about 5 to 7 minutes. Add shallot and garlic, cook until fragrant and soft, about 1 to 2 minutes. Turn heat down and add brandy. Careful when doing this, it could produce a flame. Simmer the brandy until reduced slightly. Add heavy cream and simmer for 10 to 12 minutes until thickened. Season with a pinch of salt and pepper. At this point, squeeze the lemon juice into the sauce and add the pinch of nutmeg. This will brighten the sauce.

Add pork chops back to the skillet and simmer together for 5 minutes. Turn heat off and garnish with chives. Serve immediately.