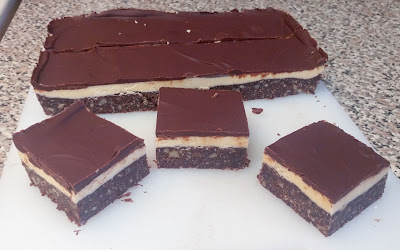 These little dessert bars are all over the internet.  All. Over.  I think I must be the last person in the western hemisphere to take a shot at making them.  But hey, I finally caught up with the Pinterest crowd.  I immediately decided that I didn't want to make one of the modern interpretations of these bars.  I wanted the original 1950's recipe.  Unfortunately, the provenance of the original recipe is a little hazy, and the supposed original pamphlet a little hard to find.  Luckily, I have a firm grasp of Google's capabilities.  The recipe below has the exact ingredients and amounts as the original, with the exception of the chocolate on top, where I used four ounces instead of three.  Because chocolate.  I extended the instructions to be a little more helpful, but this still turns out the same delicious dessert bar that the ladies of the Nanaimo Hospital were enjoying in 1952.

For layer 1, heat butter, sugar, and cocoa powder in a bowl over hot water.  When butter is melted, remove from heat, and add egg and vanilla extract.  Mix in graham crackers, coconut, and walnuts.  Pat the mixture into the bottom of a foil-lined 8x8-inch baking pan.  Set aside.

For layer 2, cream butter with sugar and custard powder, adding milk a little at a time until of spreadable consistency.  When smooth, spread on top of layer 1.  Set aside.

For layer 3, melt chocolate and butter together, mixing well.  Let cool slightly, then spread on top of layer 2.  Refrigerate bars for at least 4 hours to allow chocolate to set.

When chocolate has set, use foil to pull bars out of the pan.  Peel off foil and cut into bars using a sharp knife.

What is custard powder?