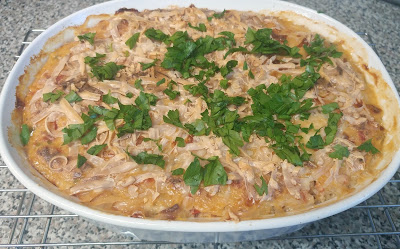 I don't know why, but all of a sudden, I was feeling shrimp-and-grits-y.  But I didn't want to make something complicated or multi-part.  I just wanted all that shrimp and grit goodness jammed into one dish.  The perfect brunch casserole.  And this recipe pretty much does the trick.  Spicy shrimp, cheesy-smokey grits, all in one place.  Dig in.

In a medium bowl, toss shrimp with 1 tablespoon seasoning blend.  Set aside.  In a large skillet, cook bacon until crispy over medium-high heat.  Remove slices to a paper towel to drain.  Into the bacon grease left in the skillet, toss shrimp.  Cook shrimp, turning to ensure even cooking, just until they are opaque.  Drain and set aside in a clean bowl.

To the empty skillet, add butter.  When melted, add the scallion, red pepper, and jalapeño pepper.  Reduce heat to medium, cook 4 to 5 minutes, or until beginning to soften.  Stir in garlic, diced tomatoes, chicken broth, milk, and remaining 1 teaspoon seasoning blend.  Bring to a boil.  Slowly stir in grits.  Stir continuously until mixture returns to a boil.  Reduce heat to low.  Simmer, stirring occasionally, for 5 to 7 minutes or until thickened.  Remove from heat and cool slightly.  Season to taste with salt and black pepper.

Stir in shrimp, bacon, egg, and ¾ of cheese.  Transfer to the prepared baking dish.  Sprinkle with remaining cheese.  Bake for 30 to 35 minutes or until heated through and bubbling.  Let stand 5 to 10 minutes before serving.