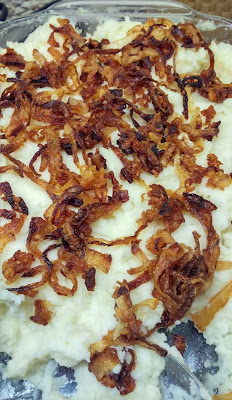 I honestly never thought I would post a recipe for mashed potatoes.  I mean, what is there to say?  "Boil potatoes until soft, drain, then add a bunch of butter and some milk/cream"?  It just seems too simple to address.  But the Pioneer Woman has solved the age-old mystery of how to make the potatoes ahead of time so you're not frantically mashing as everyone is sitting down to dinner.  And they actually still taste good when reheated.  I consider that to be a major Thanksgiving victory.

Combine the onions, flour, panko, salt, and cayenne pepper in a large mixing bowl and toss to combine. Pour about ¼-inch of oil in the bottom of a large skillet.  Heat over medium-high heat until shimmering.  Add the onions in batches, using a fork to toss them and keep them from sticking together.  Fry for 4 to 6 minutes per batch, or until golden brown. Once done, remove the onions from the pan and drain on a paper towel.  Set aside until ready to use.

Peel and cut the potatoes into pieces that are generally the same size. Bring a large pot of water to a simmer and add the potatoes. Bring to a boil and cook for 30 to 35 minutes. When they’re cooked through, the fork should easily slide into the potatoes with no resistance, and the potatoes should almost, but not totally, fall apart.

Drain the potatoes in a large colander. When the potatoes have finished draining, place them back into the dry pot and put the pot on the stove. Mash the potatoes over low heat, allowing all the steam to escape, before adding in all the other ingredients.

Turn off the stove and add 1½ sticks of butter, the package of cream cheese, and about ½ cup of half-and-half. Mash, mash, mash! Next, add about ½ teaspoon of Lawry’s seasoned salt and ½ teaspoon of black pepper.  Taste and adjust seasoning, if necessary.

Stir well and place in a medium-sized baking dish. Throw a few pats of butter over the top of the potatoes and place them in a 350°F oven and heat until the butter is melted and potatoes are warmed through.  Top with the fried onions and bake for 2 to 3 more minutes to crisp the onions.

Note: When making this dish a day or two in advance, take it out of the fridge about 2 to 3 hours before serving time. Bake in a 350°F oven for about 20 to 30 minutes or until warmed through.  Stir the butter into the potatoes about halfway through so that the potatoes warm evenly.