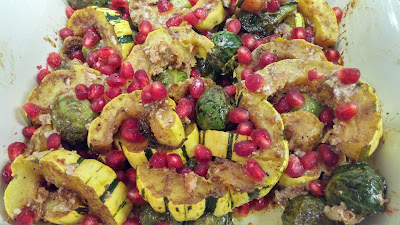 Even though most of the dishes on my family's Thanksgiving table make year-after-year repeat appearances, I keep trying new vegetable side dishes in the hopes of finding one that sticks.  The one I tried this year was this delicious plate of squash and Brussels sprouts, but I think it may have been a little too foreign...a little too different.  Any other day this is delicious, but for Thanksgiving, it doesn't quite hit the comfort factor.  The search continues.

Combine the butter and vanilla bean seeds in a small bowl. Fold in the pecans and season with salt and pepper. Cover and refrigerate for at least 30 minutes before serving.

Place the Brussels sprouts and Delicata squash in a medium roasting pan and toss with the oil and season with salt and pepper. Roast in the oven until lightly golden brown, about 20 minutes.

Remove the pan from the oven, add the pomegranate molasses and stir to combine. Return to the oven and cook until just tender, about 5 to 10 minutes longer.

Transfer the sprouts to a large bowl, add the pomegranate seeds and lime and orange zests. Transfer to a platter and top with some of the vanilla-pecan butter.