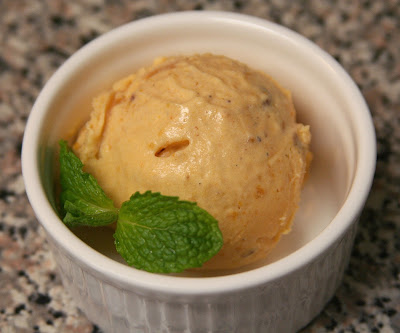 I went persimmon picking a couple of weeks ago.  Rounded up a nice big bag of mushy Hachiya persimmons.  Granted, they were about thumb-size instead of the monstrous apple-sized ones at the grocery store, but these were free, so I'll take them.  I did some research online about these orange fruits, since I had never eaten them.  Astringent, it said.  What is astringent?  I'll tell you.  Astringent is when you get a large, lovely Hachiya persimmon at the store (because they're out of Fuyu), and you wait until it's mostly soft, but not a pile of goo, and you cut it into cubes, and put a cube in your mouth, and it instantly sucks up every drop of saliva in your entire mouth and gives you the worst case of dry mouth you've ever had.  That's astringent.  So use a Fuyu for the mix-in.  Your mouth will thank you.

Pour chilled mixture into your ice cream maker and freeze according to the manufacturer’s instructions. Add cubed persimmon and pecans during the last few minutes of churning to distribute evenly.