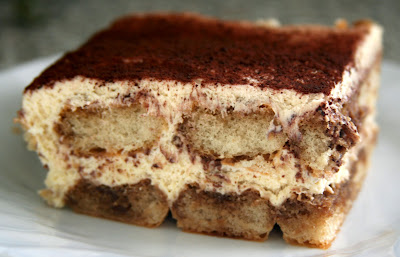 I think every Italian restaurant in the country has tiramisu on their dessert menus.  And now that I'm starting to see it at Chinese buffets, I think we can just admit that it's part of our dessert lexicon.  It's been done a million times over, but every time I see it offered, even if I KNOW it's going to be bad, I still order it.  When I was younger, I tried to make a version by Giada de Laurentiis at home, but even that didn't come out the way I expected.  A good tiramisu is hard to find.

When I finally decided to try again, I scoured the internet for what would be the most delicious, most authentic tiramisu.  I would overcome any sourcing issues, translate from Italian, whatever it took.  When I landed on one that claimed to be direct from someone's Italian in-laws, I was curious.  When they listed the ingredients like a demand letter, I knew I had found the right recipe.  This tiramisu is transcendent.  It really is amazing.  But I have to add that if you have no immune system, or you're 2 years old, or you're on your death bed, you might not want to risk the tiny chance of getting salmonella from the raw eggs.  Although I think I still would.

Bring all the ingredients to room temperature.  Pour the espresso drink into a shallow flat-bottomed bowl or dish.  Add 1 ounce of water and 1 ounce of Cognac.

Separate the egg yolks and whites.  In a medium mixing bowl, beat the egg yolks and sugar until pale yellow.  Add the mascarpone cheese and 1 ounce of Cognac and mix until blended.  In a second mixing bowl, beat the egg whites until fluffy.  Fold the beaten egg whites into the mascarpone cheese mixture.  Mix only enough to blend as over-mixing will deflate the egg whites.