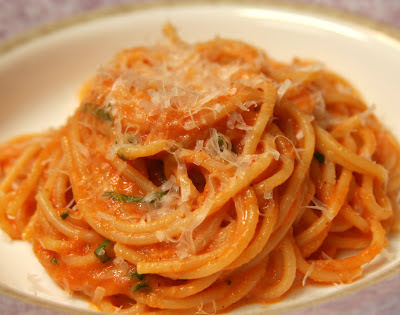 Have you seen that recipe going around for Rachel Ray's pasta with vodka sauce that is supposedly so good that it will magically make Prince Charming show up at your door and propose marriage?  Yeah, I saw it, too.  It doesn't work.  And the sauce isn't very good either.  Disappointment on two fronts.  I've been a little wary of vodka sauce ever since.

Since I'm not a big tomato sauce fan, I enjoy every opportunity to dump something else into it to make it more interesting.  Meat, herbs, cream, liquor...  So of course I had to try vodka sauce again.  This time I found a recipe for a lighter version, which I normally abhor, but this tasted pretty darn good, if a bit spicy.  Darn good enough that I will probably make it again.  I don't think it will make Prince Charming appear, but hey, that's asking a lot of a pasta sauce.

Cook the pasta according to the package directions.  Drain and keep warm.