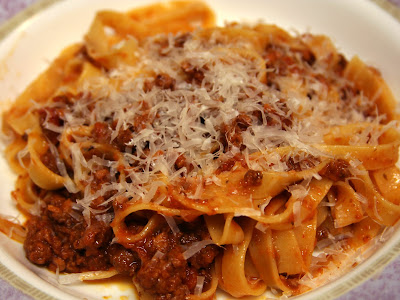 I love reading food blogs, and that's where a lot of my ideas for meals comes from.  And I love it when one of those blogs makes it, and a book is released.  It shows that the little guy can cook delicious things and be recognized without having a big name or a fancy restaurant.  Not that I mind big names **cough cough** Bobby Flay **cough cough**.  It's just nice to see other people being recognized.

My Berlin Kitchen is more than a cookbook based on a blog.  It's more of a autobiography than anything.  And even though I was feeling a little bored in the middle where all the whining took place, I liked the overall storyline.  I even made a recipe from the book, one that was promised to be fabulous.  Maybe I just don't get Italian food, but I think it fell flat.  When I think of ragu sauce, I don't just think of meat, I also think of vegetables and herbs.  And these are exactly the things she forbids.  And in the end, you just have a big bowl of juicy, salty ground meat.  Which is fine.  It's just not interesting.  At all.  Unless you're my dad, who had two bowlfuls.  So maybe I really don't get it.

Put the oil and butter in a large cast-iron pot over medium heat to melt the butter.  Add the onion and cook, stirring often, for about 7 minutes, until the onion is well cooked.  Do not let it take on any color.  Add the minced carrots and cook for another 2 to 3 minutes, stirring now and then.  Add the ground meat to the pot, and using a wooden spoon, stir and chop up the meat so that is cooks and breaks down into uniformly tiny pieces.  Raise the heat to medium-high or even high as you do this.  It takes a good amount of elbow grease and a little bit of time.

Continue to stir and cook until the meat is no longer pink (at no point, however, should the meat be browning).  There will be liquid at the bottom of the pan.  Continue to cook until that liquid has mostly evaporated, 8 to 10 minutes.  Add the wine and stir well to combine.  Simmer until the wine has mostly evaporated, 2 to 3 minutes.  Add the pureed tomatoes and the salt, and stir well to combine.  The sauce will come to a simmer almost instantly.  Lower the heat to the lowest possible setting, put the lid on the pot, and let the sauce simmer for as long as you can, stirring it occasionally.  Seven hours would be wonderful, 5 hours is pretty good, but any less than 3 and you're really missing out.  The longer you cook the sauce, the richer and more flavorful it will get.

At some point in the cooking process, the fat will separate from the sauce and float at the top, so just give the sauce a good stir every so often to reincorporate the fat.  At the end of the cooking time, taste for seasoning and add more salt, if needed.  Then serve tossed with pasta or use in a classic lasagne (this recipe makes enough for a 9x13-inch pan).