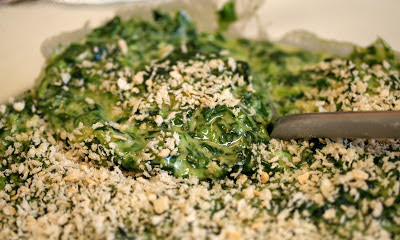 Is it just me, or is everything I've been making lately a shade of brown?  I think I'm in a rut.  I need some color in my life.  And the fastest way to colored food is to pull some frozen spinach out to thaw.  Yeah, I know, fresh spinach, blah blah blah.  But frozen is so much faster and doesn't involve simmering and chasing wayward leaves with a spider, and sticking your hands in ice water.

My future brother-in-law is from Louisiana, and he grew up with a version of creamed spinach that I wasn't sure I could get on board with.  You see, it has Velveeta in it.  Yes, that block of shelf-stable cheese product (not cheese, cheese PRODUCT) that you see in all sorts of gross recipes.  I'm not sure I want to eat something prepared in a laboratory.  But he says the recipe is awesome, and it comes from an old junior league cookbook, so I pulled out my ingredients.

The spinach is...not bad.  It's definitely something that would do well at a potluck, unless you have foodies there.  And I'm already trying to figure out a way to un-Velveeta the recipe.  But it's creamy and tasty and it certainly got me off my brown food obsession.

Cook the spinach according to the directions on the package.  Drain and reserve the liquid.

In a medium saucepan, melt the butter over medium-low heat.  Add the onions and jalapeño and sauté 3 to 5 minutes, or until the onions are wilted.  Add the flour, stirring until blended and smooth, but not brown.  Add the evaporated milk, spinach liquor, and Worcestershire sauce slowly, stirring constantly to avoid lumps.  Cook mixture until smooth and thick, stirring constantly.  Add the seasonings and cubed Velveeta.  Stir until the Velveeta melts, then combine with the cooked spinach.  Spoon into a casserole dish and top with buttered breadcrumbs.