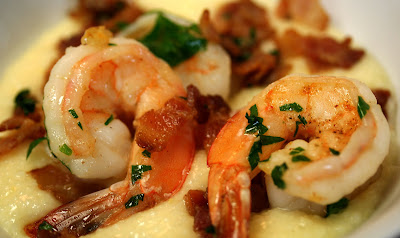 The first and only time I have ever had shrimp and grits was at the House of Blues.  And they were really quite good.  But I could never find a recipe I liked very much, and I had other things to cook.  But when my sister started saying that she made a fabulous shrimp and grits and something about Bobby Flay, I was immediately jealous.  SHE has a good recipe, and I DON'T?  That cannot be allowed to continue.

In a medium saucepan, bring the stock to a boil.  Whisk in the grits and cook over moderately high heat, stirring constantly, until thickened and the grains are tender, about 5 minutes.  Add the cheese and butter, season with salt and pepper and whisk just until the cheese is melted.  Cover and remove from the heat.

In a large, deep skillet, heat the olive oil until shimmering.  Add the bacon and cook over moderately high heat, stirring occasionally, until the fat is rendered and the bacon is golden, about 8 minutes.  Using a slotted spoon, transfer the bacon to a paper towel-lined plate to drain.

Pour off all but 4 tablespoons of the fat in the skillet.  Add the garlic and cook over moderately high heat just until fragrant.  Add the shrimp and cook until curled and pink, about 3 minutes.  Stir in the parsley and bacon; season with salt and pepper.

Spoon the warm, cheesy grits into shallow bowls and top with the shrimp and bacon.  Serve right away.