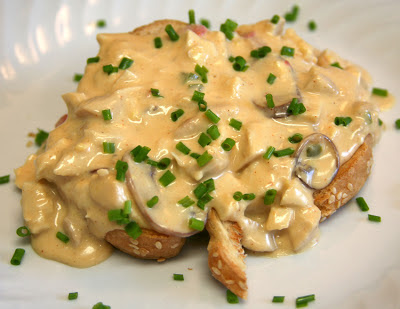 The one meal I really liked was Chicken a la King.  For a long time I thought this was just something that came from a box and that no one actually made it.  But then one day I ran across an actual recipe.  And the actual recipe turns out something that tastes just like the box.  It's bland and full of cream and probably bad for you, but it's good in a bad way.  And it's not that hard to make, especially if you have some leftover rotisserie chicken sitting in the fridge, staring you down.

Melt the butter in a large skillet over medium heat.  Add the mushrooms, green pepper, and onion; cook, stirring occasionally, for 1 to 2 minutes or until tender but not brown.  Stir in flour, salt, and paprika.  Gradually add evaporated milk.  Cook over medium heat, stirring constantly, until mixture comes to a boil.

Whisk 1 cup of thickened sauce into egg yolks; pour into saucepan.  Cook over medium heat, stirring constantly, until mixture comes to a boil again.  Stir in chicken, pimento, and sherry.  Heat through.