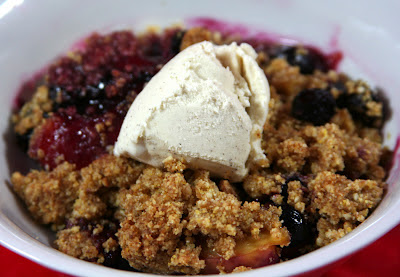 With all the fabulous produce out on the market right now, I decided to try another recipe from Cooking My Way Back Home that had caught my eye.  It's a fruit crisp, and it uses some fruits that are at their peak right now: peaches and blueberries.  I haven't really tried anything with that particular combination, but it sounded delicious.

When I went shopping for the ingredients, I had quite a bit of trouble finding tapioca flour.  The only place that carried it sold it in a big bag, and with only 1 tablespoon required, I certainly wasn't going to shell out $5 for just one ingredient.  Cornstarch worked just fine.

While the ingredient list doesn't seem very long, it seems like it took forever to bring together the ingredients for the topping (and about a million dishes).  And then when I went to put the whole thing in a casserole dish, I realized exactly how much topping that was...  It was so much topping that I almost thought I had done something wrong.  It was mounded over the top of the fruit so high it was several inches deep.  I wasn't even sure the darn thing would cook.  I can't believe this recipe was actually tested, because unless you love the crunchy topping ten times more than the actual fruit, this is not a good ratio.  If I make it again, I'll cut back the topping by at least half, possibly more.  I have left the recipe below as is.

The taste of the fruit was actually pretty good, all things considered.  And I really liked the graininess that the cornmeal brought to the topping.  Pretty delicious once the topping was scraped down to a reasonable level.  Oh, and you HAVE to top it with vanilla bean ice cream.  That is required.

In a bowl, combine the peaches, blueberries, sugar, tapioca flour, and lemon juice and stir gently to combine thoroughly.

In a second small saucepan, heat the remaining butter over low heat just until melted, then set aside to cool.

While the butters are cooling, in a bowl, stir together the flour, cornmeal, almonds, both sugars, cinnamon, and nutmeg.

When the butters have cooled, drizzle both of them over the flour mixture, then toss lightly with a wooden spoon, being careful not to overmix.  You want to have small clumps.

Distribute the peach and blueberry mixture evenly on the bottom of the baking dish.  Spoon the topping evenly over the top.  Bake for 35 to 45 minutes, or until the fruit is bubbling along the sides of the dish and the topping is browned.  Remove from the oven and let cool for about 10 minutes.

To serve, spoon the crisp onto individual plates and top with ice cream.