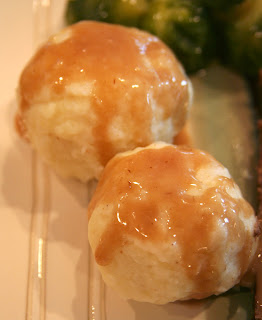 When I made sauerbraten last night, I also replicated a side dish that my mom says my grandmother served with her sauerbraten.  They are german potato dumplings with a little surprise of butter toasted bread cubes in the middle.  I couldn't remember hearing about these until my mom mentioned them.  And even then, the recipe was trial and error, trying to get it like the original.

These dumplings basically amount to mashed potatoes stuffed with breadcrumbs.  They're pretty plain on their own, but with sauerbraten gravy drizzled over the top, they're pretty delicious.  And I always like a little surprise in my dinner, especially a surprise that's fried in butter.  I personally think they might need a little bit of finely chopped parsley in the potato mixture, just to break up the never-ending whiteness.

Trim the crusts off the bread and discard.  Cut the bread into ½-inch cubes and fry them in butter and oil until golden brown, then transfer them to a paper towel to drain.  You need about 48 little cubes.

Cook scrubbed, unpeeled potatoes in a large pot of boiling salted water until tender, about 45 minutes.  Drain and cool slightly.  Peel the potatoes and then cut them into large pieces.  Refrigerate until cold, about 30 minutes.

Mash the potatoes with a fork or run them through a ricer into a large bowl.  Mix in the salt and nutmeg.  Add the flour and cornstarch.  Using your hands, knead the mixture until a smooth dough forms, adding more flour if the dough is sticky.  Mix in the egg.

Form the dough into 12 large balls, using ¼ cup of potato for each.  Insert 4 bread cubes in the center of each dumpling and close the dough around the bread cubes to form smooth balls.

Working in batches, cook dumplings in a large pot of nearly boiling salted water for 10-15 minutes or until the dumplings rise to the top and remain floating.  Make sure the dumplings do not stick together as they cook.  Using a slotted spoon, transfer the dumplings to a large bowl and keep covered with a damp kitchen towel until all of the dumplings are cooked.